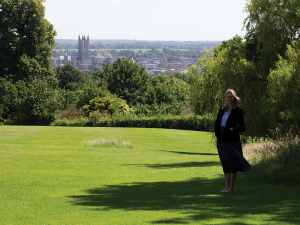 Since leaving Marlborough in 2016, we accumulated many air and road miles before finally settling in the town of Canterbury, Southeast England.

The transition from New Zealand to France to England was, how should I say, interesting. Arriving in France on 1 August, we needed to transition our daughters into a French school which was tricky. This was coupled with managing a very energetic toddler while navigating a new city on the wrong side of the road. Having not ever studied or spoken French (German was my language of choice at school), I was a bit in the dark for most things, and so was lucky that I could still work with Organic Winegrowers New Zealand (OWNZ) remotely.

Initially we lived in Reims, but it became apparent that with the commute for my husband and the ease of living in a small town, life would be a lot simpler if we moved to Epernay and we were happy there for three years. I continued to work remotely for OWNZ during this whole period and developed a great relationship with the team at New Zealand Winegrowers’ (NZW) Europe offices, creating some great initiatives within their major wine tasting events throughout the year. Each year while living in France, I attended the annual New Zealand Wine Trade Tasting in London. We introduced the Organic Wine Bar in 2019 at the OXO Tower, delivering an opportunity for our members to get their wines in front of United Kingdom and Europe trade and media.

It’s been 10 months since we made the leap - or drive across the channel - from France. After wading through the complex Kent educational system, finding accommodation in a university town just one week before the start of the academic year, and a couple of lockdowns thrown in, we really are settled and enjoying life in England. Boris has just announced that restrictions will be lifted from 19 July (some say a bit prematurely), so the possibilities for organic wine are reinvigorated.

We have relied heavily on the digital world over the past 18 months, which has gone better than we expected. Working with the markets over the past year has been truly rewarding.

Now being based in the UK, and just 50 minutes by train from central London, it will make the relationship between the NZW Europe team and OWNZ a lot more fluid. This is so important, given all the exciting new activities being planned for the coming ‘restriction free’ year.

New Zealand, as we all know, has been business as usual in most cases and so we have been able to hold a number of inperson events, mainly during our annual Organic Wine Week. Winter Symposia in late July is an exciting interpretation of the OWNZ biannual conference and consists of three one-day conferences in Central Otago, Marlborough and Hawke’s Bay.

The planned events during the week (20 to 26 September) are going to span across many different markets. Activities are planned in New Zealand and London, as well as a number of online webinars and tastings within the markets, focussing on a variety of themes, some of which will be a key part of the Winter Symposia. Many of our OWNZ members are also busy planning their own events to celebrate the week and tell their stories.

Summer has been slow to arrive in England, with many cool rainy days. However, the forecast for the next two weeks is looking bright. A very English summer!

Sarah Booker works in Marketing and Events for OWNZ.