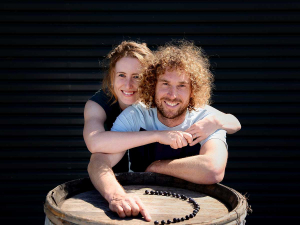 On a small vineyard in a quiet valley, a young couple is growing hope.

Pete and Alanna Chapman’s wine label 27seconds is named for UNICEF’s estimate that 1.2 million children are sold into slavery every year. “We loved this idea of being able to make a difference”, says Pete about the Waipara Valley charitable business, which has donated all its profits - $47,000 over the past three years – to Hagar New Zealand, a not-for-profit that works with victims of human trafficking, sexual exploitation and slavery.

The home base for 27seconds is Terrace Edge, where sheep paddocks have been transformed into olive groves and vines, thanks to a tramping trip Pete did with his family in 1999. That year the annual trip was in Marlborough, and when they emerged from the hills the Chapmans visited a vineyard and olive grove. “Something about it captured us”, says Pete, who was in his second to last year at school and wondering what to do from there.

On the way home they saw a real estate sign on 30 hectares of river terrace north of Amberley, and decided to invest in a “weekend hobby”. It’s fortunate they had no idea what the workload would be, says Pete, who helped plant the vineyard with his two brothers and went on to study viticulture at Lincoln University. Now they have 4.5ha of olive trees, 14ha of vines - including a jaw-droppingly steep Syrah crop - and a reputation as a premium organic producer.

Being viticulturist for the family business is a role Pete loves, but 27seconds is about making a social difference. He and Alanna had come face to face with human trafficking in Kolkata, India, when visiting friends who run a social enterprise to offer employment to women in prostitution. Alanna went on to work with Hagar, and in 2017 the couple hatched a plan to do better with their wines, making a 27seconds Riesling from surplus fruit at Terrace Edge. The project snowballed, Pete’s parents portioned off more fruit, and 27seconds rapidly grew into a whole range. “I loved working on the vines, but wanted to do more,” says Pete. “This brought the two things together.”

TThe quality of the wine - made at Greystone at a discounted rate - is not negotiable. But while most of the fruit is certified organic, they decided the growth of the social enterprise - “and what we can give away” - was more important than being purely organic, says Pete.

And the trajectory is as steep as their Syrah block, expanding its reach as customers “muscle” 27seconds into the market, approaching restaurants and bottle shops to request it be stocked. “It’s been a lot of work,” says Pete. “Probably a lot more work than we had thought.” But it’s also come with increasing amounts of support, including the independent directors now on board, who volunteer their time but bring a wealth of experience.

The wine community has got behind them too, with the harvesting contractor picking the crop for free, Guala Closures helping with caps, and Label and Litho with discounted bottle labels, says Pete. “That just means more profits can go to the cause and help it get bigger quicker.”