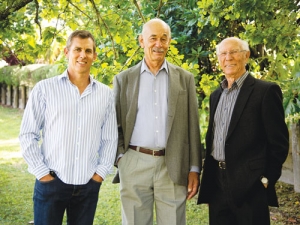 The Babich management team, from left; David, Joe and Peter.

Five cases of Babich wine were going overseas – what later turned out to be a New Zealand embassy in Tokyo so it didn’t prove to be a big influx of funds for the New Zealand economy!

Yet this was the start of a new export industry and a new beginning for Babich Wines, personified by Josip Babich and his two sons, Peter and Joe. As a keen young (part time) wine writer, I swung out to meet the new wine exporters in Henderson, appropriately on Babich Road.

After the sherry, compulsory in those days, we moved to the emerging range of table wines, Dry White, Dry Red and Vintara and the exported wine, Pinotage-Cabernet. Joe was keen to say that he (winemaker since 1958) and Peter had goals of making a top grade red, perhaps of Bordeaux chateau quality and probably based around Cabernet.

“It may take us 20 years, but we will get there” Joe told me confidently.

What he perhaps had not foreseen is that in 20 years Babich Wines would be producing 75 per cent of their product from Sauvignon Blanc, grown in vineyards not outside the door, but in Marlborough. Yet the dream of a fine red was not lost. Babich has vineyards in Hawke’s Bay, now nicely mature and presenting a healthy spectrum of red varieties, including Syrah.

Neither may Joe have envisaged the extent exports would represent the company sales.  It was to be a far cry from the ‘sherry to the neighbours’ of the 1950s and 60s.  Joe later reported that when the first container of Babich table wine went off to Europe, his father Josip had a tear in his eye. To him, such a container meant sending Babich wine ‘back home’ although it was not going to Croatia but Germany.  It was a poignant moment for him.

Having come to New Zealand in 1910 at age 14, Josip began his life as a gum digger in Northland, where he spotted the need of his countrymen beside him to enjoy a little something after work. The idea of winemaking moved him. It was after all, a drink they were all used to seeing in Dalmatia.
A vineyard was planted, the first vintage made in 1916. Before too long (1919), the move to Henderson which was also Kauri gum territory, saw Josip and his wife Mara establishing a vineyard and winery. Babich and Henderson were to became synonymous with wine.

Changes came with time.  Whilst fortified wine was the daily bread, table wines were around the corner in the late 1960s and 1970s. Muller Thurgau replaced Palomino and Baco 22a, Pinotage and Cabernet replaced Siebel red hybrids. Chardonnay became the dry white wine grape.

It was the days of change in the whole wine industry, shared often with people of Dalmatian heritage.  There were the Yukich family of Montana, the Brajkovich family at San Marino, Selaks at Kumeu. Then there was a group called Young Winemakers, including Joe Babich,  George Fistonich (now Sir George),  Ross Spence, Jim Delegat and Nick Nobilo. Together this latter group had an unofficial club, a generation taking over from their dads.

The said Young Winemakers went together to Australia, where they tasted their way through a good many wineries asking about table wines. I was there a little later, and was told by Australian winemakers with eyes wide open that ‘they had left the spittoons dry!’

Change took many forms.  Instead of starting the day by firing up the ‘still to fortify the sherries, ports and cocktails, the big swing towards table wine in the 1970s saw the new grape varieties need a new approach to winemaking as a result.  As housing expanded in Henderson, plantings increased in Hawke’s Bay. Refrigeration units became part of winemaking equipment. Old barrels, some twenty and more years old, were halved and sold off as planter boxes. Newer French oak became the norm, joined later by American oak.

Babich kept apace. With one of the first vineyards off Gimblett Road  (the Irongate vineyard) in Hawke’s Bay there was a second at Fernhill. The move to Marlborough Sauvignon Blanc was an evolution and with time, vineyards were firstly contracted to supply Babich, then purchased, including the sizable Wakefield vineyard in the Awatere Valley.

Becoming active in what was Rapaura Vintners in Blenheim, Babich took larger shareholdings as they became available, before eventually breaking free and building their own winery in Marlborough last year.

Through all this time, Babich wines and the company became an identity aligned with honesty and strong ethics.  Conservative perhaps, but solid. The company continues its sustainability program to leave the earth in a fit state for generations to build on.  Some vineyards are certified organic and biodynamic practices can be seen playing their part. All are part of the industry sustainability program.

The quality shows as well; ranges of sound, dependable wines with fine fruit statements.  Joe has handed the winemaking on to qualified people while he takes the role as managing director. Peter modestly calls himself ‘the gardener’ but any move to retirement saw him back before long with a ‘a desk in a corner’.

Peter’s son David is active in the business as General Manager, making three Babich generations through the 100 vintages. The range runs from an Estate range, through a Black Label group into Irongate (red and white) to The Patriarch, the company’s premium red.

Both Joe and Peter have been active in the industry as well as providing mentorship to others.  Peter was on the management committee of The Wine Institute and Deputy Chairman at various times. Joe was chief judge at the Air New Zealand Wine Awards as well as a panel leader at the Auckland Easter Wine Show. Together they have built a fine family company.

It’s a wine company that has seen 100 vintages through hard times and times of change and adaptation from markets to products, viticulture to winemaking.

The product range and the markets around the world testify to a quietly successful and respected entity that can look forward to its second century with confidence – and pride.

WorkSafe is urging farmers to focus on keeping kids safe on the farm over the summer holidays.

Recently I received a book written by Michael and Judith Bassett, that outlines the history of the Babich family's 100 years within the New Zealand wine industry.