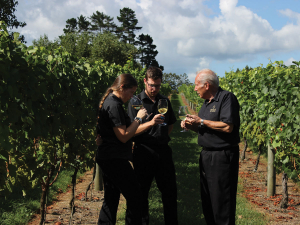 Tyler and Amber Soljan were just five years old when they stepped into a bin full of grapes, and into five generations of family tradition.

"I quite vividly remember standing on our deck trying not to fall out of the bin," says Amber, adding that particular wine, while very special, wasn't offered for sale.

Their hands-on entry into the wine industry from an early age was one shared by their grandfather, Soljans Managing Director and Head Winemaker Tony Soljan, despite being two eras apart. As the only five-generation winery in New Zealand, there is simply "no escaping" involvement in the family industry, says Tony: "That's standard practise in any winemaking family."

While Tyler remembers running around in the vineyard "being probably not too helpful", Tony recalls walking on top of vats, crunchin down the grapes in 1950s Henderson that was, at the time, "the wine centre of New Zealand".

He was "amongst a whole community of winemakers", he says. "It was great, an absolutely superb place to grow up, magic". And despite many changes, the industry's culture of working to help each other out hasn't changed, he adds.

Tony's grandfather began the proudly Croation Soljan legacy on New Zealand soil in 1927, when Bartul Soljan and his family arrived in Aotearoa from Stari Grad, Croatia. The family planted the first vines in 1932 under Bartul's Pergola Wines. His son Frank started the Soljans Labels in 1937, eventually passing his passion for wine on to his children Tony, Rex and Raewyn.

Another generation later, Tony and his wife Colleen's daughters Tonia and Lisa went their own ways career-wise, becoming a teacher and a barrister respectively, but grew up in the winery getting hands-on experience, just like those before. Today, both maintain a presence in the company on the board of directors alongside Colleen.

For Tonia's children Tyler and Amber, now in their 20s, the decision to remain in the family business was a topic of serious conversation when they were younger, hampered by the fact neither particularly liked wine. "If we don't find an interest here, then what happens?" Amber remembers wondering.

But things changed, and now Tyler is "obsessed" with wine, perfect for his role in management and sales. The progression into the family business was different for his generation than those before, he says. "For Tony, it was get your experience as young as possible, whereas for us, we have been pushed and encouraged to do the study and get the qualifications first."

Amber says she too "never liked wine massively" but had a fascination for the communication side of the industry, including label design and photography. "(Soljans) gave me an opportunity to explore those spaces and then go on to learn more about it." With a communications degree, she now works part-time for Soljans and at NZME, "trying to absorb what I can and bring back what I can in the future".

For Tony, seeing the fifth generation come through is "is a unique privilege... And that comes back to our strong family ties. We've got a history of winemaking that we're proud of". Working with family has natural benefits, he says "Very often, the most convenient time for us to meet is after work, at dinner... That means there's always a constant, every conversation progresses. You can implement it over the weekend and by Monday it's happening."

While immensely proud of Soljans' long legacy, Tony's careful not to let the past hold back the future.

"We've come along at the right time," adds Tyler, talking of the new areas the industry never had to focus on historically. "We've come in with that youth side and allowed that focus to shift slightly. It's brilliant for us to easily shift across that way slowly over the years rather than having everything change at once. It's given us a good direction that not only takes on what we've done over the last 85 years but also has plans to continue for another 85, which is important for us."

In 2015, the whole Soljan clan travelled to Croatia to visit the cobbled streets of their ancestors, a reminder of where they, and many other Kiwi families, came from. "The Croatian heritage is important and should always be recognised... If it wasn't the Dallies, you wouldn't have the wine industry you have today," says Tony.

That, and the family business' five generations, "gives us an immense sense of pride in everything that comes out of Soljans", adds Amber. "It's not just a company, it's not just a wine label - it's way more than that, and it's got so much more than that behind it. It's just really cool to say, my family's been doing this for so long, and it's bigger than just a bottle of wine."