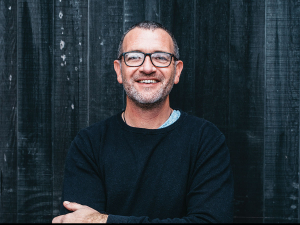 The best wines wear a unique story of the place they hail from, says Clive Dougall of Deep Down, loyal to the provenance of his wines.

They’re naturally from organic or biodynamic blocks, grown by people passionate about their land, then taken through the winery with minimal intervention, using indigenous yeasts and minimal or no sulphur, telling their story without “trickery, technology and chemicals”, says the winemaker. “I just want to make authentic wines that are much more expressive of the place they come from.”

Clive, who is chair of Organic Winegrowers New Zealand (OWNZ), was one of the speakers on the ‘making wine natural’ panels at the OWNZ Winter Symposia in late July, joining Dom Maxwell of Greystone and Ben Weaver of Churton at the Marlborough event, and Hayden Penny of Te Awanga Estate, Amy Farnsworth of Amoise Wines and Amy Hopkinson-Styles and Olly Styles of Halcyon Days at the Hawke’s Bay symposium.

It’s an exciting topic, says Clive, describing the natural wine sector as “a bit cloudy, no pun intended”, but also in a constant movement of discovery and development. Natural winemaking, he says, is at “the pointy end” of New Zealand’s wine industry. “Winemakers naturally want to experiment. They don’t want a recipe,” he says. Natural winemaking is a progression from that, which “takes the reins off a little bit and allows the wines to have a certain amount of destiny”. So he was “super delighted” to have natural wines on the menu of the Symposia, which was rolled out in lieu of the biennial Organic and Biodynamic Winemaking Conference.

Clive first came across natural wines in Australia around 2010, when he was a young winemaker at Marlborough’s Seresin Estate with a growing interest in organic vineyards and low intervention wines. “It was really starting to take off over there”, he says of the Australian scene, describing natural wine bars “popping up” and top sommeliers getting excited. In those early days the wines, most of which were imported, were pretty “edgy”, he says “They were basically faulty and the Emperor’s new clothes more than anything.” There was also a little section of preservative free wines available - appealing to the health-focussed rather than hipsters - which “were absolutely terrible”, he says. “I thought there has got to be a way to do this better.”

But despite the flaws, the people involved were happily pushing boundaries, he says. “Natural wines to me were wines that people were thinking differently about and producing; not for the sake of being different.” And after years of experimenting, those winemakers have progressively learned what works, “gradually removing bits and pieces in the winemaking process until they got to the stage where they were comfortable and opened the doors to really have a go at it,” he says.

As Seresin moved towards certified organics, and then towards organic wines, Clive trialled less intervention, including the slow reduction of sulphur over a five year period. “A lot of the winemakers don’t own their own brands, so you have to work in tandem with your owner and marketing team and it’s a gradual change and learning process,” he says, noting that the slow burn allowed Seresin’s customers to evolve with the winemaking.

When Clive and business partner Peter Lorimer launched Deep Down in the spring of 2019, there was no question that the wines would be low intervention, including a sulphur free Pinot Noir. In market they make more noise about the wines being organic than they do the hands off approach in the winery, he says. “It’s more about making wines natural than making natural wine.”

In its fourth year, Organic Wine Week is happening during the Spring Equinox, from 20 to 26 September 2021.