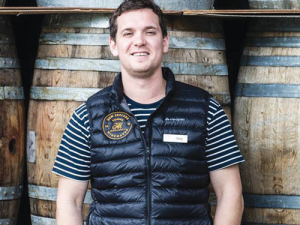 It may be just a coincidence, or it could be a secret weapon – but the Tonnellerie de Mercurey Young Winemaker’s of the year in both 2017 and 2018 bought a house on the exact day they competed in their regional finals.

Last year it was Kelsey Daniels who was juggling the South Island competition and confirming details with the bank.

This year it was Young Winemaker of the Year for 2018, Greg Lane’s turn to do the exact same thing.

Lane, from Foley Family Wines in Marlborough went a step further though, moving into his new home on the Friday and Saturday before the national finals were held on Monday. The one good thing about that was it gave him plenty of time to practice his presentation to his partner, while he was carrying boxes and moving furniture. The fact his partner (Sarah Adamson) is also a winemaker, provided another secret weapon in his studies for the competition he says.

Thirty-year-old Lane, who was born in Adelaide, had no desire to be anything other than a winemaker. Growing up so close to famous wine regions such as McLaren Vale, Adelaide Hills and the Barossa, meant wine was no stranger to him. But it was the opportunities that winemaking could provide that made him undertake oenology at the University of Adelaide.

“I was looking for something that was science based, creative and would allow me to travel. So it pretty much ticked all those boxes.”

Even now years after completing his degree, he is still enamoured with the creative aspect of winemaking.

“I love that you produce something tangible through your efforts over a year. It is so rewarding compared to other professions. You plan what you are doing for years out, you work through the season, then you have two months to make the product and you have something at the end to show for it. That is exciting.”

Having worked in Australia, France, Italy, America and New Zealand, it was this country that captivated him for a long-term career.

Lane says he heard about the Tonnellerie de Mercurey Young Winemaker competition when he was living in Australia, and was impressed that such an all-round competition was being held here.

“There certainly isn’t anything like this in Australia and I don’t know of anything around the world that is like this. What I like about it, is it rewards an all-round winemaker. It is not just about blending a wine or doing just cellar work. Winemakers have to wear a lot of different hats, and this competition rewards that.”

The finals competition, which Lane says was a big step up from the regionals, pulled on all aspects of winemaking, from a general knowledge essay, a presentation on appellation, to producing a CapEx for an imaginary winery, and blending. But there was one section Lane is keen to forget. Forklift driving.

“I blame Nick (Entwhistle, one of the orgnanisers) because he set out the course,” Lane says. “We had to drive the forklift through a maze of pallets and I managed to knock three of them over, which wasn’t good. I have since banned myself from the forklift since I came home.”

Lane’s prize package for taking out the title of Young Winemaker of the Year is impressive.

He has won a travel allowance, a training grant sponsored by NZSVO, a wine allowance and a fully funded trip to the Tonnellerie de Mercurey cooperage in Burgundy. On top of that Lane will also be a guest judge in an upcoming tasting for Cuisine Magazine.