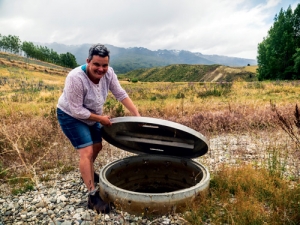 Amisfield winemaker Stephanie Lambert lifting the lid on one of the waste water cells.

Especially as we approach that time when extensive net canopies dot the Central Otago landscape.

But that is exactly what Amisfield did in 2006 when they created a revolutionary wetland within their vineyard.

With an estimated 30% of New Zealand birds being wetland species, what potential benefit could there possibly be for creating idyllic wetland conditions so close to grapes? Actually, the benefits far outweigh any negatives. As a water purification tool, a wetland provides an environmental masterstroke at handling the many thousands of litres of waste water generated in the winemaking process, so the bigger question really has to be, why haven't more wineries got one?

"Well, it's probably due to the cost" says Amisfield winemaker Stephanie Lambert.

"It was very expensive to set up and it costs a bit to use but it does make us feel better about what we are doing. Recently, we calculated that this winery uses 6 litres of water for every litre of wine we make, so that is a lot of water that would be disappearing off the property if we didn't recycle it."

The original vision for the wetland came from Jeff Sinnot who was the general manager at Amisfield in the early 2000s when plans for the winery were first drawn up. Having studied in Australia, Sinnot was seen as something of a maverick when he suggested to his professor that he was interest in organic viticulture.

"Well that won't last long was what I was told," says Sinnot. "Sustainability was very much a fringe thing, the industry had the attitude that if it moves...kill it and I guess that just spurred me on."

Today, Sinnot provides specialist winemaking and viticultural advice to a select group of clients under the banner of his company Vinesense. A decade since he was involved at Amisfield, Jeff is only too happy to discuss what he calls a definite highpoint in his wine career.

"The Amisfield winery is still my alma mater when it comes to the pinnacle of designing and trying to construct and operate a fully sustainable winery. When we sat down to figure out what to do, I was told by the director to build a great winery that makes great Pinot.

"Essentially what we did was figure out what great Pinot Noir actually was, an achievable cost and value for the wine, and how to do this with the smallest impact on our environment? Quality, economy and sustainability were the three tenets that we had to adhere to, kind of like the holy trinity." 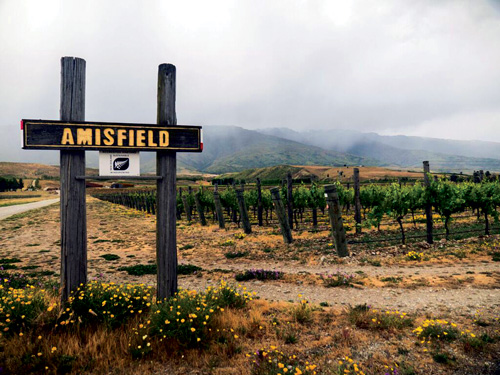 After engaging an engineer who specialised in sustainable wastewater management systems, the idea was hatched to recycle wastewater via an onsite wetland. As Amisfield are rural, hooking into a town waste system wasn't that practical but at a consent hearing for the winery, Sinnot was astounded at the attitude of the Central Otago District Council.

"They were skeptical from the start and when they basically told us to dig a hole 'like everybody else does', I was outraged. They didn't get it and thought we were weird. They couldn't believe that we wanted to spend money to process water to make it exactly the same as it went into the winery."

To be fair to the council, while constructed wetlands are recognised internationally as being extremely efficient for processing wastewater, the concept has taken a while to catch on in New Zealand and no winery in Central Otago had ever suggested one. In fact, the Amisfield wetland wastewater plant is still the only one of its kind in the region, but the process is remarkably straightforward.

Wastewater from the winery firstly settles in an underground tank. Then it gets pumped through a stainless steel screen to separate out the solids, which go to the composting system, while the liquid continues into two settling tanks where further solids are removed. The water then flows down a cascading aerator designed to oxygenate the water. At this stage, the heavily oxygenated water that has had 90% of the solids removed, hits the first cell of the wetland where the real magic happens.

"That first cell contains sedges and they have adapted to a wide range of pH. So that they can handle relatively acidic water. When the water hits that first cell, it's loaded with high levels of potassium which is probably the most soluble electrolyte that comes out of winery wastewater," says Sinnot.

"As the water progresses from cell to cell via the constructed herringbone shape, the specially selected wetland plants that are all endemic to the region, effectively eat components in the wastewater. This means nitrates, phosphates, potassium, sodium, magnesium and various other micronutrients in the water."

Once the water graduates to the final stage, which is a 90-metre long gravel screen that Sinnot calls 'The Polishing Cell', it's expected that the water will be completely clean. Though, after the first six months in operation, the local council was still pretty skeptical.

"When we took our first sample of the water from the wetland after it has been processed and sent it to the council for testing, they honestly thought we were bullshiting them as there was nothing to be found in the water. So, they decided to come and have a look for themselves. When I opened the final cell for them and a frog jumped out, the council inspector looked at me and said; 'well that works doesn't it.'" 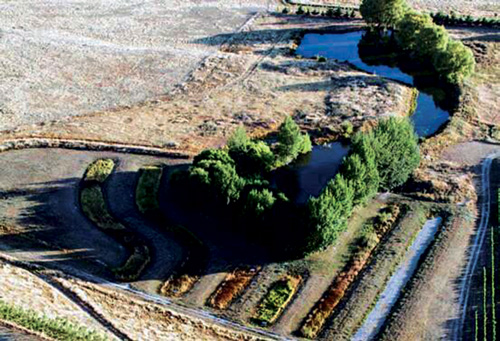 Following a company motto to "work with nature and not against it" Amisfield are really very proud to be the owner of New Zealand's first winery wetland wastewater plant. While the purified water from the wetland doesn't go to the grapes, it does irrigate an integral shelterbelt of trees that in turn minimises soil degradation and erosion.

"A wetland is not only amazing for the environment," says Lambert, "it is also a great visual marketing tool. Our visitors can actually 'see' what effort we are putting into sustainability. For instance, our harvest interns see the tangible side of what happens to the water when they are hosing equipment down. When I think about having a wetland, its more a case of why wouldn't you?"

"If we can do it in a 600 tonne winery in Central Otago, imagine what's possible in a region like Marlborough? Because it is not a requirement (yet), councils are still backward thinking in terms of directing the industry. So, the industry needs to take this by the horns themselves. We need to look for ways to close our production loop, so that our carbon footprint is as low as possible and we are not a burden on the other ecological systems in this valley."