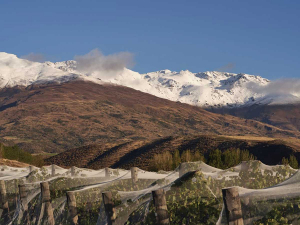 “The consistently high standard of wine being produced at Amisfield is astounding,” said awards founder Luke Thomas of the win.

Winemaker Greg Lane, who joined Amisfield early this year, says the award – along with seven gold medals from nine entries - is the result of hard work from the vineyard and winemaking teams over the past five years, in order to gain organic certification for the 91-hectare estate at the foot of the Pisa mountain range. “In particular, the work done by our vineyard manager Andre Lategan to spearhead the change in our farming is really inspiring, and combined with the sensitive winemaking approach of the previous winemaker Stephanie Lambert, it has allowed the vineyard characteristics to shine through the wines.”

The owners of Amisfield decided to pursue organic certification as part of their long-term approach to agriculture, with a philosophy of doing what is best for the land and the people who work on it, says Greg. “Amisfield has a large team of staff, and we want to keep them happy and healthy, so the organic approach of discontinuing synthetic chemical sprays or herbicide was the clearest way to achieve both these aims.”

There are plenty of other environmental initiatives beyond organic certification, including a key project to implement mid-row subsoil irrigation, says Greg. In the dry, windy region of Central Otago, this minimises the amount of water lost due to evaporation, delivering it directly to the roots. This allows Amisfield to actively grow a clover cover crop in the mid-row sward, enriching the tough, nutrient deficient soil and increasing organic matter. “The improvement in soil health since implementing this has been obvious. Healthy soils support plant and vine growth but are also more resistant to erosion and wind damage - two very real issues in Central Otago farming,” says Greg.

In the winery, all wastewater is processed through a series of artificial wetlands that use aquatic plants to purify the water so it can cleverly be reused for vineyard irrigation.

The stunning vineyard is part of a larger farm, with sheep on the higher terraces. Amisfield is planning to increase biodiversity with native tree planting on the exposed landscape and within unused parts of the vineyard. The property also has a healthy population of guinea fowl, says Greg.

“In addition to their rambunctious personality, they are very useful at keeping insect pressure at bay as they cruise through the vineyard.”

All Amisfield’s wines are single estate, and enhancing the unique character of their place within their wines’ flavour profiles was another part of the decision to convert to organics. Greg and the team think organic farming make the vines more in tune with the soil. “We have already begun to see the effect of this in the winery year on year with greater intensity of flavour apparent, and much clearer differences in character between the blocks.”

There is no denying the demand of organic wine is on the rise, but Greg believes it is due to more than consumers becoming increasingly aware of the health benefits. “There is more and more certified organic wine produced in New Zealand each year, and it’s an approach adopted by many of the most revered New Zealand wine brands… I believe consumers are also making the link between organics and quality, which will only increase demand further.”

Greg is excited at the prospect of continuing Amisfield’s organic journey. “It is a storied name in the New Zealand industry… I hope that as a team we create delicious wines that increasingly show the unique aspects of our place.”

The country's first major Organic and Biodynamic Winegrowing Conference marks a coming-of-age for the wine movement in New Zealand.