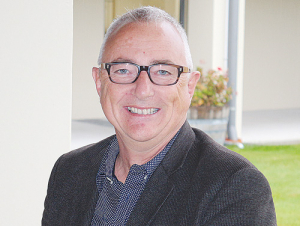 “I knew there was red wine and white wine and that was about it,” he says.

Eighteen years later, as he leaves the industry he has fallen in love with, he knows far more. And he knows plenty about making the most of this country’s God-given ability to grow great wine and the importance of moving forward sustainably.

The former General Manager of Sustainability completed 18-years of service to the New Zealand wine industry on June 16. He and his wife Liz are taking some time out to travel, before he launches a new career using the reams of knowledge he has gained to create a consultancy for the wine industry here in New Zealand and overseas.

With a Botany Degree majoring in Biology and a post graduate degree in Marketing, Manson took up the reins of Science and Research with NZW back in 1998. At the time the New Zealand wine industry was just emerging. There were less than 9000 hectares of productive vineyard and the total value of our exports was just $97,633. There was no unified industry, instead two separate entities, New Zealand Grape Growers and the New Zealand Wine Institute. There was however a common bond that Manson was brought in to help consolidate – research.

“Both the Wine Institute and the Grape Growers were different parties, but they were tied at the hip when it came to research.”

Although there wasn’t all that much research going on in those days.

“There was less than quarter of a million dollars in the research budget.”

Compare than to what is being spent these days, more than $20m.

Having spent nine years working on research with the Kiwi Fruit industry, Manson was the ideal candidate to expand the wine industry’s research portfolio and as Science and Innovations Manager, he began working towards collaborative partnerships.

“When I started you could have counted the number of researchers working on grapes and wine on two hands and most of them were doing so part time. But over a period of time we have built up relationships, built up partnerships and have gone into co-funding situations with both the Crown Research Institutes like Plant & Food and Auckland and Lincoln Universities.”

A direct result of those partnerships has seen a whole generation of researchers who have cut their teeth in the field of wine and grapes.

“Since that time Auckland University has established a post graduate programme in Wine Science. Now they have so many students that have gone through with PhD’s and New Zealand now has a really good research group involved in the industry.”

The exponential growth of the wine industry in the past 18 years has been something Manson has been at the forefront of. He says as growth continued there was a demand for more knowledge about what we were doing and how we could do it better. That has led to programmes such as the Sauvignon Blanc Programme, 1 and 2. While there is no doubt now that the results from this collaborative research have presented some game changers for the industry, not everyone was keen initially.

“When we started it, people were asking us why we were doing it? We know everything we need to know about Sauvignon Blanc, they were saying, we are making it and the world is loving it, so what is the point?,” Manson says.

“Well the reality is that there is always more you can know. And some decades into that research we are still learning about Sauvignon Blanc. Yes, we are recognised as a world leader, but if we are to continue to have that world leadership position, we should know more. Not just at a production level but at a technical level as well.’

There was also concern expressed that any research findings might be used by our competitors to create a Sauvignon Blanc that emulates the New Zealand style. In other words, were we about to give away trade secrets?

“My view and the organization’s is you can’t quarantine information. Plus we get just as much from researchers visiting New Zealand and our researchers travelling overseas. We can all learn a lot from what is happening elsewhere. The big thing is to use what you have more creatively and more intelligently than your competition, which will allow you to stay ahead.”

When Manson began, the Sustainable Winegrowing programme as we now know it, was just beginning. In fact the pilot programme which was known as the Integrated Winegrape Production had only begun life a few years earlier.

From small beginnings, the programme now has 95 percent of all wineries and growers as members. While other countries such as Chile and South Africa have similar programmes – none is as widespread as the New Zealand one. In Manson’s eyes we are world leaders.

“When talking strategy, we often say should we be taking a leadership position? Well the fact is we have. We are recognised both in the international wine sector and the productive sector of New Zealand as being real leaders. There is a commitment to producing really good wines in a really good way and we are ahead of the curve.”

Not that it has always been an easy road convincing people.

“In 1998 there was a genuine feeling that if you were into sustainable things, then you were a sandal wearing, granola eating, greenie. We have all moved on from that. The consumer has also moved in their thinking in that time.”

The next step in the sustainability road is to continue to move forward. As cliché as he knows it sounds, Manson says sustainability is a journey not a destination.

“If we say we have made it, we have missed the point. You can look at that negatively and say you can never do enough, or you can look at it another way and say there is always another challenge.

“Look at where we have come from. People say the sophistication in the vineyards has changed dramatically. Well so too have our practices in terms of sustainability. To some extent that may be a measure of our success when people think we have always done things in this way. Actually we haven’t. The changes we have made have been incremental, but they have all added up. You don’t want to live your life looking backwards, but by doing so, you can see we have come a very long way, in a very short time.”

As Manson prepares to look ahead to new challenges, he admits he will miss the passion and enthusiasm of the wine industry.

“Wine has an edge. Who doesn’t like a glass of wine? Our members right through have a passion about the product. They will sit around the table and discuss wine at length. I don’t imagine a Fonterra member sitting around discussing a glass of milk. I will miss that, although I still intend being involved in another capacity in the future.”