Dancing Petrel: A passionate part of the Northland wine trail 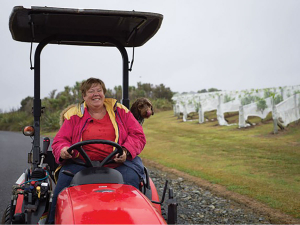 Kim and Graham Gilkison were fishing in Northland in 2018 when inspiration flitted past.

A storm petrel was "dancing" around the boat, just above the water, "a bit like the fantail of the seas", says Kim, who had bought grapes from the nearby Paewhenua Island and was in search of a wine label. "They call it the Jesus bird, but that's a bit of a step too far for a wine," she adds with a laugh, having settled on Dancing Petrel instead.

Later that year the Gilkisons went on to buy the unique 12 hectare vineyard on the northern slopes of the island, overlooking Mangonui Harbour and the entrance to Doubtless Bay. It was an unexpected decision for the couple, who had no experience of winegrowing, but had moved up from New Plymouth and seen the vineyard, previously known as Butterfish Bay, fall into some disrepair.

"I could see the vineyard needed a boost and some serious TLC, and decided I would get into the wine industry," she says.

They knew the block could produce good wine, "because we'd had earlier vintages and they were lovely", and it has a "nice little microclimate", she adds. "I wasn't convinced the reds were going to be good but they are."

They may have "fallen" into winegrowing, but it's been a "fantastic change in lifestyle", thanks in part to the collegiality of the Northland wine industry, which has offered a whole lot of support. "If it had been an industry where everyone felt that they were competing against each other, then wouldn't have been so easy."

The region's producers are also connected by a small but wonderful Northland wine trail, and Kim says visitors have flocked to the tasting room as news of the revitalised vineyard spreads through the grapevine. The couple plan to boost Dancing Petrel's offering this year, having won Top Energy's $30,000 Business Development Fund, a programme launched in 2014 to encourage and promote economic growth in the Far North.

The plan is to open a tasting room café in time for the 2022 summer season, to entice the surrounding community and Northland wine trail visitors to enjoy their wines and produce from the local areas. Kim and Graham will use the grant to contribute towards training vineyard staff, hiring a chef and training café staff, as well as focusing on market development of Dancing Petrel.