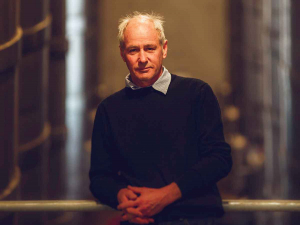 It is quite an achievement for anyone to say they have been in the same job for 40 years and are still going strong. Paul Mooney, chief winemaker at Mission Estate is one of those very few.

Given Mission Estate is 168 years old, it is even more impressive that Mooney has been at the helm for almost a quarter of the company’s existence.

It’s not as though he walked into the job straight from school, or even straight from university. He actually came to the job a little later, after graduating from Waikato University with a Science degree, majoring in physics. It was after spending a year as a geophysics technician on Campbell Island back in the late 1970’s that Mooney made the decision to change careers. He had spent many holidays in the Bay, visiting family. His brother-in-law was Ian Clarke who just happened to be CEO at Mission Estate, which meant Mooney had an understanding of the wine business well before he changed career. You could say the stars were aligned and in 1979 Mooney moved from the wind-swept sub Antarctic island to the oldest winery in New Zealand.

“I had always been interested in food and wine and there is a practical element working in a cellar that I really enjoyed,” he says. “It’s very much a hands-on job, but it’s also a job where you have to be quite active and thinking at the same time.”

He began as a trainee winemaker, under the care of then chief winemaker Brother John. Learning his craft at the feet of the last of the Marist Brothers to hold the title of chief winemaker has forged Mooney’s skills.

“Brother John, my mentor, trained in Bordeaux, so we always had this strong French influence. I was lucky enough to inherit all his old textbooks.”

In 1979 and right through until 1990, the old Mission Estate homestead was a seminary for training priests. Mooney says those students played a vital role in the production of wine, albeit, for just a few months a year.

“The students picked all the grapes by hand and the interns in the winery were also students from here. So I worked alongside them for a few years, until they mechanised the vineyards.”

In 1982 Brother John retired as Chief Winemaker and for the first time in the history of Mission Estate, a layperson took on the role. Mooney has been at the helm ever since. During those years he has seen the company grow, not only in terms of production, but also stature. Initially there were hardly any hybrid vines on the two sites – one at the home of Mission Estate in Greenmeadows, the other at the original site, Meeanee.

“We had Chassler, Muller Thurgau, Cabernet and Pinot Gris in my first year. Pinot Gris was used for altar wine, sweet wine and Methode Traditionelle was also made from that.”

That sparkling wine was New Zealand’s very first, released under the name Fontenella. It was the brain child of Brother John.

“I opened one of those a little while ago,” Mooney admits, “and it was pretty good.”

What made the opening of that wine even more special was he drank it with the man who made it – Brother John. “It was pretty special,” he says.

The decision made by Ian Clarke to turn Mission Estate from a cottage industry into a commercial winery in the 1970’s saw a move towards more commercial hybrids. Varieties such as Merlot, “which was really new to Hawke’s Bay,” Gewurztraminer, and Sauvignon Blanc joined Cabernet and Pinot Gris. Later came Chardonnay and Syrah. Mission Estate’s Syrah is the second biggest selling Syrah after Church Road.

But the Meeanee site, while historical, wasn’t producing the wines Mooney was aiming for.

“It was quite heavy ground and the wines we got were a bit disappointing.”

Poor supply added to the hurdles the company had to overcome before they could start making a mark in the New Zealand wine scene. In the 1990s Mission bought a Gimblett Gravels site and later in 2002 a second site. All of a sudden Mooney had the fruit he had been looking for.

“The differences were huge, they were completely different. Cabernet from this site is amazing. The grapes, the flavour everything.”

If he had to pick a favourite, he says Cabernet would be it. “It is the most interesting red variety to me. It can be difficult, but it puts up quite well with high humidity at harvest time which we often get here in Hawke’s Bay. It is quite robust and it likes a bit of heat in the middle of summer. If we get a really good summer, we get really good Cabernet.”

While what happens in the vineyard is very different now to what it was 40 years ago, the changes within the winery itself have also changed dramatically. “When I first started it was very primitive. The presses were so primitive, and the techniques have improved.”
A voracious reader of wine making styles the world over has helped Mooney keep up to date, and he says the company has become adept at adapting to new technology.

Even with 40 years under his belt, he says he’s never experienced cyclical trends.

“I haven’t seen any real patterns in the 40 years. The 80’s were pretty good apart from 88 (Cyclone Bola). The 90’s were cooler and we were impacted by Pinatubu for about five years. The 2000’s were better.”

“The 2013 wines when we made them were fantastic, but they are still quite closed. Thirteen was the Cabernet vintage because we had the heat in January. In 14 we had the same heat but we had a nice autumn so the Merlots did better than the Cabernets.”

Mooney is nothing if not optimistic about the future of New Zealand wine.

“Given what we do here excellently, we will survive. We have some work to do in terms of marketing and getting the word out to the world about how good our styles are, and I believe they are very good. Our top wines are world class. But because we are cool climate, we have challenges in New Zealand and it is sometimes harder to pull off.”

To celebrate Mooney’s 40th anniversary, Mission Estate released a Semillon, with the fruit coming from vines that were planted at Greenmeadows the year Mooney began his career, back in 1979.

Where now with Organic Focus vineyards?

Back in 2011, an ambitious three-year project began, looking at what it took, cost and involved to turn a vineyard from conventional to organic.