Giving It A Nudge 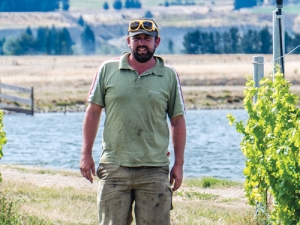 Four years ago, Nick Paulin won The National Young Viticulturist title on his second attempt. After competing in the regional finals five times, and winning twice, Paulin is the still the only national winner to emerge from Central Otago.

Having developed an interest in horticulture while still at secondary school in Invercargill, Paulin’s curiosity for grapes was stirred at a Lincoln University open day.

“I guess I wanted to do something outdoors, so I thought that I’d give it a nudge,” says Paulin. “At that time viticulture was booming and someone had told me that it was more of a lifestyle choice than a job, so that sounded like a good gig.”

While studying at Lincoln, Paulin spent his summers working firstly at Peregrine and then at Felton Road, which is where he found a permanent role once he had graduated.

“That was at the end of 2004 and I kind of just walked into a job there. It had already dawned on me, that seeing a full season through at one vineyard would be really valuable, but coming out of Lincoln where you get force fed conventional viticulture, going to a bio-dynamic vineyard was a real eye opener.  I realised that you actually can do things another way.

“I have never put a herbicide on a vineyard, and to be honest I never want to. There are enough tools out there that you don’t have to use herbicides.  What Bio-Dynamics taught me was to look and think about the whole system, look at the bigger picture rather than obsess over individual problems.”

His learning curve continued to grow, especially when he was part of the inaugural Burgundy exchange in 2006.

“Wow, it was a completely different set-up to here. They just do what they do because that is what is done, whereas at Lincoln there had been quite a lot of technical focus and asking questions. Where they just did things because ‘that was what granddad did’, and they know it works, we tend to think that there is a better way out there, but sometimes it’s just better not to tinker.”

In 2010, Paulin left Felton Road and took up his present position as the viticulturist at Peregrine.

In the time that Paulin has been looking after the viticulture at Peregrine, he has not made any knee jerk decisions based on his own preference for biodynamic viticulture. Rather, in keeping with his laid back personality, Paulin’s influence has been to implement subtle changes with a big picture focus.

“I’ve learnt that you can’t just rely on biodynamics, you have to bring some science in and some other processes that biodynamics will get you to eventually. However sometimes you don’t have that time and just need to get things going now. One of the biggest things from Biodynamics is the focus on soil health, recognising that what happens underground is really important.”

“Coming up for five years I feel like I am understanding what is happening here now. I almost feel like we are getting to the point of simplicity that I first thought of about viticulture. You know, its kind of come full circle coming from Felton Road where things were relatively straightforward as they have done it for so long, to coming here and going Holy S**t this is actually a bit more work, to where I can now see progress and feel like we are on top of this.

“Yes we do work some long hours, especially at the moment, but when the things that you enjoy are so handy, it’s still possible to fit them in.”

• This year marks the 10th anniversary of the Young Viticulturist of the Year competition, and promises to be the biggest ever. Bayer New Zealand have come on board as a major sponsor, providing $25,000 towards the competition.

Regional competitions will be held throughout the country in July and the national finals will take place during the Romeo Bragato Conference in Hawke’s Bay in August.