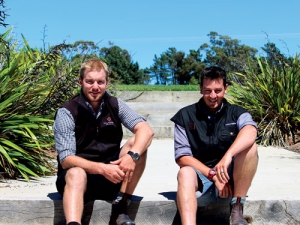 This year marks the 10th anniversary of the National Young Viticulturist of the Year competition.

In the next few months dozens of young people involved in viticulture throughout New Zealand will take part in regional competitions, with the aim of making it to the Nationals, and onwards to the Young Horticulturist of the year.

The two most recent national winners, Matt Fox (Gisborne) and Paul Robinson (Hawke’s Bay) are advocates of just what taking part in such a competition can do for you. Not only in terms of workplace credence, but also personally.

For Robinson, who represented his region for four years before winning the national title, says his first emotion was one of; “I have finally knocked the bugger off”.

But in more pragmatic terms, he says taking part over such a period of time gave him confidence in a range of different fields.

“It has been five years of doing the competition, so everything I have learned during my entire working life, can be attributed in part to aspects of the competition. It’s hard to pin point one or two things that I have gained – but I would say it has given me self-confidence. I now not only have a greater knowledge of the (wine) industry, but I can now get up and speak in front of people – I couldn’t do that before.”

For Fox, getting to know other young vits from around the country, has been a major bonus.

“The contacts and networking I have gained have been amazing. Also taking part in the Young Horticulturist of the Year, I found it eye opening to look at other industries and learn from them. It is important not to focus just on viticulture – you have to be able to look outside that. And that competition made me look at my job with more of a business eye. Rather than just saying you are a vineyard manager, you need to realise that whatever you do in the vineyard, it will impact on the rest of the business. You gain a view of the whole picture.”

Both Young Vits believe more people should be putting their hand up for the regional competitions, without fear of being embarrassed.

“A lot of people seem to be scared off – but all the things that make up the competition, are areas that you need to be efficient in, if you want your career to move forward,” Fox said.

Young Winemaker Of The Year

2015 will see the first ever Young Winemaker of the Year competition being held in New Zealand. It will be based along similar lines to the Young Vit, with eligible entrants required to be 30 years or under, a New Zealand resident who has completed two previous harvests or has two years experience in a wine production role in New Zealand. Marlborough Committee Chair Sophie Matthews says a competition of this sort has been a long time coming.

“It will give recognition to those who are up-and-coming in the industry and I feel it has been needed for some time.”

One of the supporters of the competition, Jeff Clarke, Chief Winemaker at Ara, says; “As support of a vital part of the wine business, namely our people, this competition will assist in demonstrating the skills and craft of the next generation of leaders of our industry.”