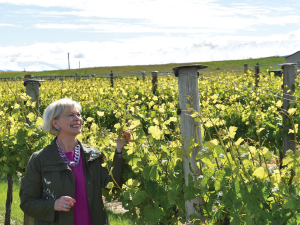 Women in wine initiatives have grown "like wildfire" around the world, says Janiene Bayliss, co-owner and Director of Ata Mara winery near Cromwell.

“The big thing is that globally, the dialogue needed to be changed,” she says, scoffing at the refrain from some that it is all one industry. “We are not, because the representation was never there.”

Having two women elected to the New Zealand Winegrowers (NZW) board in last year’s election is evidence that the conversation is changing, says Janiene, who held an event in Central Otago in 2017 with 50 women, having knocked on doors a year before and said, “tell me about your business”.

Janiene was recognised in a recent Decanter feature on 12 wine women around the world, in the UK wine magazine’celebration of International Women’s Day. The extraordinary line up - from Evelyne Roques-Boizel, President of Champagne Boizel, to Susana Balbo of Susana Balbo Wines in Argentina - comes as no surprise to Janiene, who knows her industry has long been rich with talented women. But she is thrilled to see their voices being heard more, including around the board table.

Janiene was living and working in London when she and her husband David Pratt bought a sheep farm in Cromwell in 2000, on the advice of her father, a Southland horticulturist who saw the potential of wine in the area. They started their conversion to grapes and regularly visited, splitting their life between the two hemispheres. Seven years ago, Janiene came back for the whole season, from October to harvest, and found a community of women with little collegial support or sharing of knowledge. “They didn’t even know their neighbours.” Many of the women she met had come from city upbringings and corporate jobs, before moving to Central to run wine businesses and families, “and it was absolutely mind boggling – the difficulty of doing the simplest of things”.

Janiene grew up in the Southland countryside, and knew how to navigate rural isolation. “I could kick into what it means to be a woman in a rural area and everything that brings: the pastoral care and the collegial aspect and the sharing of knowledge.” She says having a regional group for women saw conversations begin about getting into foreign markets, the high cost of production in the south, and other challenges of rural living. They brought a new voice to the wine conversation, “and that was the dialogue that wasn’t happening”, says Janiene.

When it came to higher representation, there was a perception that women in the wine industry were not qualified enough or “amateurish”, she says. “In Central we have nine women who own and established their own vineyards. We have women who have PhDs in the industry.” The numbers at board level simply didn’t add up, she says. “We were looking at hugely qualified women – 25 women winemakers in an area the size of Central Otago.” Now the NZW board, which has had no elected women in the past, includes Misha Wilkinson from Misha’s Vineyard in Cromwell and viticulturist Emma Taylor from Hawke’s Bay. “So we have broken through the vineyard ceiling”. One woman at a board table is a place, two is a presence and three women is a voice, she says. “Those numbers will keep climbing.”

Janiene says the strides made are “greatly liberating”, talking of the “enormous support” now available for women in Central Otago, covering everything from learning about business and employment issues to up-skilling with vineyard or winery equipment. Sometimes it is just the ability to give someone a call and talk through challenges, she says. “Things that are quite simple but actually quite profound.” Janiene now lives in Hawke’s Bay, but when it comes to her own business, she’s truly valued the advice and support she’s received on how to create more markets and sell more wine globally. Since Covid-19 hit the world, that support has only grown, with meetings every month for the 200 members, she says. “Now you really need as much support as you can get.”

Janiene was delighted and surprised by the Decanter story, where she was placed amid an “extraordinary group of women”, and she already has plans for a dozen wines by a dozen influential women – “the best wine in the world by women”.

In the meantime, she continues the business of winegrowing on 16 hectares of the 27ha sheep farm, which requires knowledge in everything from climate, science, soil and vines, to exports, marketing and pricing, while navigating each market’s alcohol laws. Having a strong business background allows her to approach challenges in “solutions mode” but “it is a very complicated and technical business”, she says. “I suppose that is what makes it never boring.”

New Zealand Winegrowers drives Women in Wine regional groups around the country and runs various initiatives and events including the bespoke mentoring programme for women in all aspects of the industry. The organisation began after the 2016 New Zealand Winegrowers' board elections yielded no nominations for women. Chief Executive Philip Gregan says that simply didn't compute, given the number of women doing great things in New Zealand wine, so the organisation followed the example set in other countries, where women working in the industry were given support to ensure a greater voice, and to reach their goals within the industry. Now there are thriving regional Women in Wine groups around the country, he says. "Connect, inform, change has always been the focus of Women in Wine New Zealand and it is very positive to see the progress and change which has been made through regional and national networking, education and the successful mentoring programme."