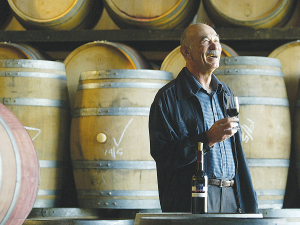 Joe Babich was on track to become a pharmacist, when he defied his mother's wishes and joined New Zealand's nascent wine industry instead.

"At 18 he was lined up to do an apprenticeship with a pharmacist in Henderson," says Babich Chief Executive David Babich of his uncle, who died in January after a two year battle with cancer. "He was quite close to embarking on that when he said 'no I am not going to do that; I am going to join my father and brother in the family business."

It was a fork in the road, adds David. "Become a pharmacist or become a wine guy." Sixty years on, Joe's decision to become a wine guy gave New Zealand not only a "supremely skilled winemaker in one of our most highly respected pioneer wine families", says former wine journalist Terry Dunleavy. "But one whose constant quest for quality and unique flavours took him into the formal judging of wine."

Joe was a real gentleman, as "fabulous guy with a quiet restrained dignity about him", says New Zealand Winegrowers Chief Executive Philip Gregan. "But that didn't stop him being very progressive."

Joe's brother Peter - nine years his elder - had left school to work in the vines in 1947, aged 16, joining his father Josip Babich, who came to New Zealand from Croatia at 14, and launched Babich Brothers in Henderson in 1916.

When Joe entered the business in 1958 they were growing 15 hectares of grapes of Babich Rd and doing all the work themselves. "That was all we had for the year, on a vineyard you could throw a hoop over," says David. "I think really Joe just wanted to join his older brother, and make the most of this pretty humble situation."

But Joe's strength in science, and relentless study of the chemical relationships inherent in winemaking, made him an asset to the company, which had relied largely on Croatian traditions and instinct. "My grandfather would have known how to make wine aged 10,” says David. “But when something went wrong, he didn’t know the science.” And while Peter was winemaker for some time, his forte was in the business side of the operation.

Joe became part of a group coined the Young Winemakers, including Nick Nobilo, Ivan Selak and George Fistonich, all between 18 and 20 years old, who would meet weekly or fortnightly to taste and discuss wines. “They were trying to figure it out,” says David.

The remaining Young Winemakers are now in their 80s, and still meet for lunch each year. “What they brought as a group was a lot of sharing,” says David. “They knew to try and lift the tide and to build the industry as a collective,” he says. “They knew that it was better that everybody makes better wine than that someone makes better wine and the rest of it is shit. It was a really strong approach at the end of the ‘50s going into the ‘60s.”

In 1958, Babich Wines’ annual grape crush was around 30 tonnes, and production was largely in fortified wines, to appeal to the local clientele, despite the Croatian tradition of table wines.

In 1958, Babich Wines’ annual grape crush was around 30 tonnes, and production was largely in fortified wines, to appeal to the local clientele, despite the Croatian tradition of table wines.

That transition in the late ‘60s and ‘70s was “greatly assisted” by the stainless steel and refrigeration utilised in the dairy industry, he says. “I remember in the ‘70s, we were installing stainless as quickly as we could get it.”

Joe and Peter progressively modernised the winery and Joe forged a new path for Babich’s approach to winemaking, partly influenced by a trip to European wine regions. The next phase for Babich was to move south in growing grapes, first to Gisborne and then on to Hawke’s Bay, including as one of the pioneers of the Gimblett Gravels, where Joe saw potential for Riesling, Chardonnay and Bordeaux reds.

On the newly planted Irongate vineyard, he went on to make one of the first New Zealand Chardonnays to be fermented and matured on its yeast lees in barrels. David says Joe didn’t know whether the process would ruin the barrel, so worked on the project in secret, not telling Peter, who might have objected. When the first Irongate Chardonnay emerged, it was a winner, drawing acclaim from wine judges, winning the1985 Vintners Trophy, and impressing the family, “and Babich has made Irongate Chardonnay ever since”, says David, noting that is the wine they associate most with Joe.

He notes that we think of New Zealand’s wine industry as pretty sophisticated, “but you can go back less than 40 years and they didn’t know about oak fermenting Chardonnay with any certainty”.

Over 130 combined years in New Zealand’s wine industry – 70 for Peter and 60 for Joe – the brothers worked together to grow Babich and the industry, generous with their time in order to support greater success, David says. “Together, they carved out a partnership enduring 60 years of active involvement in the wine industry.”

For Joe, that generosity included 35 years of wine judging, including as Chair of Judges at the Air New Zealand Wine Awards on six occasions.

“Joe’s a guy who’s been around my whole life, in the winery and on Babich Road,” says David. “It’s pretty strange to think he won’t be around.”