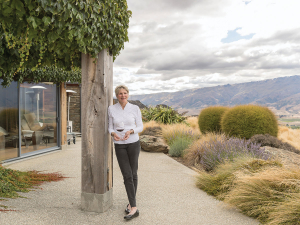 The lessons she learned in the burgeoning Napa Valley in the 1980’s helped her when, more than 20 years later, she decided to return to her New Zealand roots and establish a vineyard in Central Otago, Zebra NZ.

Lyndsey still has homes in both the USA and New Zealand, but she plans to retire here – one day.

Born in Lyttelton, where her father worked as a marine engineer, Harrison emigrated with her family to the United States in 1956 when she was 12 years old.

She returned to New Zealand at 17, to study nursing, but it was when she became an air hostess for Pan American Airlines a few years later that her appreciation for food and fine wine began.

Travelling and holidaying for some 20 years in the wine regions of Italy and France, she decided to take the leap into purchasing a vineyard of her own, with the Napa Valley winning out over Tuscany. Her husband Michael was a keen football fan. “It was funny how that worked out,” she laughs. “We decided in the end it would be the Napa Valley, because in the eighties they would have football games on television!”

Harrison became one of a new age of people wanting to try something new, “..the lifestyle thing...” She learned alongside others in the industry, about planting and growing grapes, making and selling wine. She became the winemaker as well, with the guiding hand of consultants Helen Turley, John Kongsgaard and Marco di Giulio.

Harrison Vineyards comprised seven hectares of Cabernet and some Chardonnay vines on the now famous Pritchard Hill - one of the most coveted Napa Valley addresses. She looks back on the experiences as a time of discovery and immense learning.

Zebras became synonymous with the Harrison label, coming about from a joint love of the African wildlife and Michael’s skills as an amateur artist.

Wind the clock forward two decades. Michael had passed away in 1999, and Harrison was newly married - for about a week - when the dreadful events of 11 September unfolded. They served to strengthen her resolve to start anew in New Zealand.

Central Otago winemaker Grant Taylor, of Valli Wines, whom she knew from California, was the key influence in her decision to plant on two blocks of land purchased from Bendigo Station, some 20km north of Cromwell.

Knowing the hard facts about wine marketing she chose to focus on Pinot Noir.

“Coming from the US, I knew people don’t want to pay $30 a bottle for white Pinot [Gris].” She acknowledged it would be tough selling premium-priced Pinot Noir in the US, where New Zealand’s reputation was built on Sauvignon Blanc. “But I also didn’t want to spend my time running around the world selling wine, as I’d done before.” Her uncompromising vision became to produce top quality fruit for top quality winemakers.

“In 2003 we planted our first vines and developed our blocks with a goal of becoming a supplier of consistently exceptional fruit.”

Meanwhile the other Zebra block, 24 hectares, lies in the valley below, at 223-230m above sea level. Villa Maria, Pinnacle Wine Group (for NZ Wine Society), Isabelle Estate, Wooing Tree, and a US label - Innocent Bystander are clients, through broker Steve Harrop. The grapes have previously gone into other single vineyard designate wines including Craggy Range and Mt Difficulty.

There are specific criteria for buyers of the Zebra grapes, with a focus on single-vineyard wines in the $40 or more retail range.

“Each year our grape price goes up. But there doesn’t seem to be much pushback against that,” Harrison says.

With increasing demand and a waiting list for grape supply, a further seven hectares was being planted in November this year.

Having recently moved her US home back to St Helena, Napa, Harrison makes four or five trips to New Zealand each year, for two to six weeks each time.

She still has a love of flying, and wants to spend time back in the US with her ageing rescue dog, Chester.

She sold the US wine business in 2004, and has been managing the Zebra business since buying out her now ex-husband three and a half years ago.

She considers herself lucky to have Craig Carter as her vineyard manager.

“He farms with the same commitment to quality that I embrace. And he has good people working for him. They are all very very committed to the property.”

With the potential to expand plantings, establish premier guest accommodation and an on-site winery, maybe even an event centre, Lyndsey is excited about the shape of things to come. But whether that’s in her time or not is to be seen.

“I plan to sell, eventually... We’re not on the market to sell, but I’m 75 now, and I don’t want to be doing this for ever... There are opportunities, not plans, at this stage.”