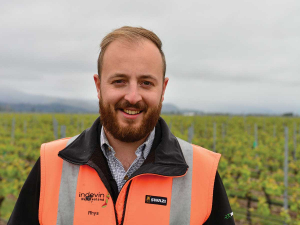 Throw in seasonal vagaries, plant physiology, technical advances and business strategies, as well as the challenge of managing people across a myriad of roles, and  “no two seasons are the same”, says Indevin’s Bankhouse Estate Assistant Manager Rhys Hall, who took the title for Marlborough at the national competition in October.

He’s currently looking down the barrel of a summer and harvest with half the usual labour force. Bankhouse staff are supported by a crew of Recognised Seasonal Employer (RSE) scheme workers from the Pacific Islands, but has just 25 of its 60 this season, due to border closures. “And we don’t know if we are going to lose them.” The company has been recruiting more Kiwis and working closely with the Ministry for Social Development (MSD), finding good people through Work and Income’s Mana in Mahi scheme and other apprenticeship programmes, he says.

Rhys is a perfect example to those looking for opportunities, having joined Indevin as a casual tractor driver, and worked his way up to his current role. “If you are keen to take on responsibility, and keen to learn and push yourself, there’s definitely a career path here,” he says. “It is an industry that needs people.”

Rhys studied horticulture at Massey University in Palmerston North, during which he worked internships in cropping, viticulture and apples. Viticulture fascinated him, and on completing his degree, Rhys moved to Blenheim to become a “viticulture champion” at the Farmlands store.

When he decided to move on to a hands-on job, Rhys applied for work as a tractor driver at Bankhouse. “Then I asked to stay on as a permanent vineyard worker and did some supervision of RSE workers, a bit of irrigation and some management of a team of casual tractor drivers.” He then spent a year and a half as a viticulture technician, before becoming Assistant Manager a little more than a year ago.

He’s looking forward to upcoming developments at the 600 hectare Bankhouse, with another 900ha to be planted at the Waihopai Valley vineyard over the next five years. “That will be an exciting expansion,” says the viticulturist, who loves working on such a large scale, knowing that a single frost, for example, can impact on one corner of the vineyard in a completely different way to another. In past frosts they’ve recorded 4C at one side of Bankhouse, while at the other, 4km away, it was down at -0.5C. “You have to manage the individual blocks, but also think about how it fits into the big picture, which is interesting,” says Rhys.

The frost risks were fresh in his mind as he went into the national young viticulturist competition, held at Ata Rangi Vineyards in the Wairarapa just a week after Marlborough was beset by a series of frost events. His boss tried to keep him well away from the sleepless nights of frost fighting, but the alarms still came through. “It was pretty hard to keep focussed on the competition,” he admits.

Going forward, Rhys wants to keep one foot in vineyard operations and the other in the technical side of the business, “so I can have an eye on each”, he says. “My aim is to be a well-rounded manager.” The young viticulturist competitions have been a great opportunity to push himself out of his comfort zone, and gain contacts and confidence. And he found inspiration in meeting the past winners of the national event, who have gone on to do “some pretty amazing things”, he says. “It’s also pretty inspiring that all the previous winners are still in wine and are leaders in the industry.”

Giving It A Nudge

Four years ago, Nick Paulin won The National Young Viticulturist title on his second attempt. After competing in the regional finals five times, and winning twice, Paulin is the still the only national winner to emerge from Central Otago.