The Canyon at Tarras Vineyards 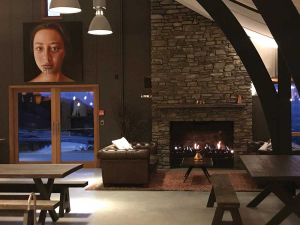 There’s a silver lining to the delayed opening of The Canyon at Tarras Vineyards this summer, with a new partnership formed with Wanaka-based catering company Morsel, to open a restaurant at the venue.

The Canyon - a hidden gem in Central Otago’s Bendigo Hills - is a credit to Hayden’s knack for finding solutions and passion for recycling. The building came from the Highlands Motorsport Park near Cromwell, and was known as “The Nose”, because it formerly had a giant-sized nose identifying the wine aroma room of its previous life. It was about to be demolished when Hayden visited one day in 2016. “I had been trying to sell them my wine, and when I went to do a follow-up the barman told me he was out of a job. That’s when I came up with the idea that I could buy the building and move it.”

Which is what he did, “lock, stock and barrel” - a feat that required road closures as it crossed the Cromwell Bridge and headed north towards Tarras and up the steep incline to its new home. The building features a curved roof and much of the original pergola, and blends perfectly into its new setting, perched above a canyon with a backdrop of kānuka-clad hillside, along with landscaping that includes 1,000 natives.

It has consented capacity for 385 for weddings, gatherings, small concerts and conferences, and also has a small theatre that seats 70. Future plans include adding accommodation, and planting a further 7 hectares of grapes to add to the 3.5ha Tarras Vineyard established in 2002.

A public opening of The Canyon at Tarras Vineyards, postponed from September, will now be held in January. The restaurant will initially be open for lunches from noon to 4pm over the summer, with a view to extending the hours as demand increases.

Hayden Johnston’s journey in the wine industry began 18 years ago, literally by accident.