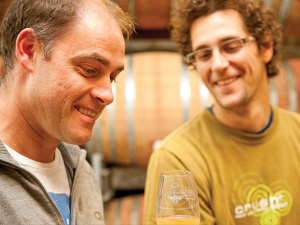 Hayden Johnston’s journey in the wine industry began 18 years ago, literally by accident.

The founder and owner of Tarras Vineyards was hit by a car while out running in London, where he was spearheading a project for a multi-national insurance group. He’d recently run the New York Marathon, had cycled a thousand miles around Europe, and was enjoying his career, but after eight days in St Thomas’ Hospital Hayden returned to hometown Dunedin to recuperate, prioritising his health over work. “Coming back, I quickly appreciated how beautiful it was here,” he says.

Drawn to Central Otago, Hayden found himself signing up for two properties on the same day. “I couldn’t say no to either.” One was a cherry orchard near Clyde, which he sold after Covid-19 hit, to help finance The Canyon - a beautiful new venue on the home vineyard.

The other piece of land was high on the terraces of the old goldfields at Bendigo, where Hayden planted grapes in 2002, founding Tarras Vineyards. The wines found international acclaim when The Canyon Pinot Noir 2009 took out championship trophies at the International Wine Challenge and the Decanter Asia Wine Awards. The Canyon Pinot Noir has more recently been described by Michael Cooper as one of New Zealand’s classics.

The following winter Hayden headed back to the UK to set up a wine importing and distribution business for Tarras Vineyards and other New Zealand wines in London and Dublin. But that came to an abrupt end around 10 years ago, when the Global Financial Crisis hit restaurants and smaller distributors. “The real clincher was in the Christmas trade,” says Hayden. “There was a big dump of snow and the warehouse collapsed… it spelled the end of our business overnight.”

The experience encouraged him to return to Central, where Hayden cherishes a legacy of farming organically, passed down to him through his Māori heritage. In 1836 his ancestor, Captain James Joss, purchased a parcel of land on the remote northern peninsula of Stewart Island, and later married and grew vegetables with Hayden’s fourth great grandmother Kuru Kuru, of Ngāi Tahu, who had grown up on Ruapuke Island in Foveaux Strait. At the time the low windswept island - now uninhabited - boasted a population of around 200 Ngāi Tahu people and was one of the few places in southern New Zealand where Te Tiriti of Waitangi was signed in 1840. “Our grandfather Poppa spoke fondly of having a Māori princess as his grandmother,” Hayden says.

“They loved their land and our family origins have been the inspiration for Kuru Kuru wines. Each bottle of Kuru Kuru proudly displays a portrayal of her moko kauae, the mark carved on her chin, signalling her respected position in Māori society.”

The brand was originally one Hayden used in the UK but it now has a home at The Canyon, where a giant portrait inspired by Kuru Kuru, by renowned Māori artist Greg McDonald, has pride of place. Hayden is a founding member of Māori winemakers’ collective, TUKU, which is united by a common ethos to winemaking, business and life.

Kaitiaki whenua, care and guardianship of the land, is an important guiding principle, says Hayden, who embraced organics early on and plans to leave the soils in better condition than when he started. “We’re not owners of the land, we’re just passing through.”

More in this category: « Rising fortunes Made with care »
back to top