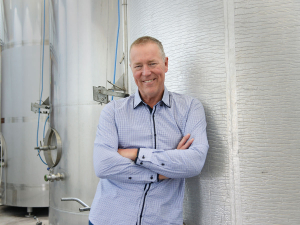 It’s 35 years since Roger Parkinson planted vines in Martinborough and this year he celebrates three decades as winemaker at Nga Waka. But it began in Paris, he tells Joelle Thomson.

His greatest extravagance is horses and his greatest fear is climate change, so the unseasonable weather in Martinborough has winemaker Roger Parkinson on edge.

It’s an extremely rainy, overcast day in late spring 2021 when we talk about his journey into wine and how he became one of the early producers in Martinborough’s wine scene. The climate occupies much of the conversation, due to the heavy continuous rain over three weeks, but Roger’s wine story is a more romantic than the wet weather. He first tasted wine and enjoyed it as a 15-year-old in Paris. This early exposure to good and very good wine later saw him change career twice to finally find his niche as a winemaker.

Roger boarded at Rathkeale College in Wairarapa while his parents were posted overseas, and when school holidays came around, he had the fortuitous experience of travelling to Europe to see his family and, it turned out, to taste wine. “My father was posted in Paris and just down the road was Steven Spurrier’s wine shop, Cave de Madeleine, so Dad got to know him and asked him to pick out a dozen wines each month to enjoy at home, at functions, and to learn.

“Dad was looking to learn more about wine so it was incredibly lucky that he lived so close to that wine store. My first trip to Paris was interesting because I got to try some pretty good wines and when we travelled around France, we tasted more, which gave me a pretty early appreciation of the role of wine in daily life where it wasn’t a special thing but just part of the meal. It was also a good first exposure to what quality wine could look like and how amazing it could be.”

His parents then went to Peru, where there is a wine industry, and later his father was posted to Rome, so there was more wine to come during Roger’s teenage years. He then went to Victoria University in Wellington and, while working towards his BA in history and French, “made a bit of money on the side as a wine waiter at a motor lodge opposite the Botanical Gardens and went to tastings at Wilson Neill”, he says. “Wine was taking hold during those years”. He went on to become a teacher, ditching that for human resources before studying wine at Roseworthy in South Australia when he was 28 years old. “It was all very unplanned but I never looked back once I was studying wine.”

The lightbulb moment that led him to plant grapes in Martinborough came when he returned home after his wine degree. “What really appealed to me about Martinborough was the quality of the first wines coming out of the region. Even in the early days with a bunch of disparate varieties ranging from Cabernet to Müller-Thurgau, and people figuring it out as they went, the quality of the raw material looked impressive.”

The unrealised potential was exciting. “Once I could see that potential, I didn’t have an interest in going elsewhere, although I could have been perfectly happy in Marlborough or Hawke’s Bay based on the quality of wine… I just loved the idea of being on the first rung of the ladder, albeit there had been some interesting wines produced, but they were really still figuring it out and I wanted to be part of that.”

Roger bought land there in 1986 and Nga Waka was one of the second wave of wineries in Martinborough’s early wine days. The other wineries in the village in those days included Ata Rangi, Dry River, Chifney Wines, Martinborough Vineyard and Te Kairanga.

While he remains one of the only original winemakers at the helm, Roger sold the winery and brand to Jay Short and Penny Dupey in 2015. “I got into the wine industry to make wine but of course to do that you’ve got to do all the other stuff - marketing, compliance and management - and now with new ownership and a general manager, I’m only doing the stuff I really love, which is fantastic. These days (General Manager) Mick Hodson has to pick up all the other stuff.” Mick was Roger’s first brand manager at Hancocks back in the 1990s, “so it’s come full circle”, he says. “When we were looking to hire a General Manager just a couple of years ago, I knew he was looking to leave Auckland and the synergy with the brand was ideal for him to step into the role.”

Harvest dates are significantly earlier in Martinborough than they were in the late 1980s and early 1990s, but Roger says the biggest change has been more recent. “The shift in harvest dates has not been gradual. It’s been mostly over the past five years, so it begs the question of whether the region can continue to make high quality Pinot Noir in the medium to long-term future. It’s not enough to impact on Pinot Noir now, but if the trend continues, it could do.”

January now looks more typically like the hottest month in the region and autumn rains tend to be earlier, he says. “We’re living in an area with a relatively short growing season so we get budburst in September and traditionally start picking at the start of April, so we have moved to between two to three weeks earlier for picking at the end of the first week in March. That’s really significant. You’re talking 14 to 21 days earlier over what had been a stable pattern for some time. The trend is what’s important.”

This year marks Roger’s 30th of continuous winemaking at Nga Waka and a cellar door is also currently under construction, due to open mid-year. Three decades is a milestone by any stretch but particularly in a country as new to wine as New Zealand and a region that’s even newer.

Asked if he has any regrets, Roger says in typical pragmatic style: “Not many but I wish I had bought much more land in Martinborough when it really was a steal.”