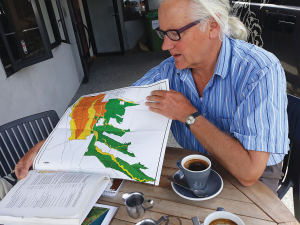 “It’s a shame we don’t value the knowledge and experience that those guys have,” Steve Smith MW tells me. I was talking to him for the purposes of another piece on Hawke’s Bay I was working on, but I wanted to get his thoughts on a man called Keith Vincent.

I’d previously spent over two hours talking with Vincent – a soil scientist. His contribution to my piece was the foundation of two paragraphs, and a quote, 19 words long. At no point did I have the space to mention his back story and his impact on the industry which, while understated, has been big.

Educated in Wellington as a soil scientist in the late 1970s, his magnum opus remains the soil map of Marlborough’s Southern Valleys. Commissioned in 1985 by the Catchment Board to aid planning decisions, its impact on the burgeoning wine industry in the Wairau was considerable. He moved to Hawke’s Bay in the early 90s, taking up several soil-related jobs in the region.

Further studies included the injection of pesticides (and herbicides) into soil and later monitoring their presence at sites further down the anticipated water flow in order to gauge an understanding about groundwater flow and the persistence such compounds – “that formed the basis for many a good scientific paper,” he says, ensuring I mention colleagues Jim Watt and Murray Close. Unpublished works include a stint with Jim Watt at Makahu Saddle, in the Kaweka Ranges, examining water movement through the volcanic ash soils there.

“It was fascinating digging soil profiles down through the litter layer,” he says. “There’s a point where you get to the air fall ash [from the Taupo eruption] and this was falling hot, burning the leaves, and you see this layer and you think, ‘shit, this is New Zealand’s archeology.’”

But the main reason I was talking to Vincent was about his impact on viticulture. His links to Marlborough didn’t end with his move – he helped and advised Ruud Maasdam and Dorien Vermaas in setting up Staete Landt, his clients in Hawke’s Bay included Gary Wood (then at Pernod Ricard) and Steve Smith MW (who moved from Villa Maria to Craggy Range in 1999).

By the late 90s, Vincent’s branch of Landcare Research was shut down and he set up Soil Selection Services Ltd in 1998. His first consulting job was “with an overnight bag, a spade, a tape measure and a notebook … fast forward, and at the end I was using GPS, everything was on computer and I had a nice truck.”

The discipline is a demanding one. Numerous pits are dug throughout a property, often with an excavator and in between these, numerous, smaller pits may be dug with a hand auger or spade going down 1 or 1.5m. The soil profiles at each hole are noted and the geological notes added and the whole is combined to produce a report on the soil profile of a certain site.

He mapped Keltern for Villa Maria, began some of the early work on Kereru Road (Mangatahi) and worked with Smith on the Craggy Range plantings at Te Muna in Martinborough, as well as the Gimblett Gravels site. He continued to work on soil profiles for viticulture until 2008.

“The simplest way to explain it is that I couldn’t work on my own anymore,” he says. “Because it’s a pretty lonely job. It’s also when you bring the data home – in many ways that’s the loneliest aspect, in the office on your own all the time.”

As well as his work on southern valleys of the Wairau, he is just as proud of the 10 years spent mapping soils in the burgeoning New Zealand wine scene – mainly in Hawke’s Bay.

“He’s bloody good,” says Smith. “Elwyn Griffiths – who produced all the original [Hawke’s Bay] soil maps – was Keith’s mentor. It’s a great shame he has to do something else for a living. He’s so valuable. His discipline will come back into vogue – it’s the value of soil.”