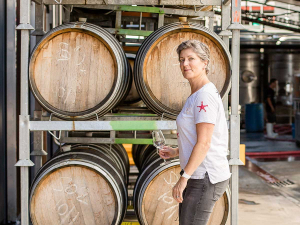 The namesake of Jules Taylor Wines in Marlborough received the magazine’s Winemaker of the Year Award, celebrated as “one of New Zealand’s modern pioneers”. Jules makes outstanding wine, is fiercely proud of her region, and mentors the up-and-coming breed of Kiwi winemakers, judges said. Jules had her first vintage in 1994, and immediately ditched plans to become a viticulturist, thriving instead on the buzz of the winery during harvest. She worked hard to make her mark in Marlborough’s industry, becoming one of New Zealand’s few women winemakers before setting off for vintages in Italy. She spent nine years alternating vintages in Marlborough and Italy, including five harvests in Sicily.

Jules and her husband George Elworthy launched their own label in 2001, with 400 cases of Jules Taylor Wines, and have grown it well beyond their expectations in the years since. “I never imagined this would feed my non-existent family and I certainly didn’t think I could ever give up my real job,” she said in the April/May 2020 edition of Winegrower Magazine.

Ben Glover, the winemaker behind Glover Family Vineyards and Zephyr Wines and co-founder of The Coterie, a contract winemaking facility devoted to small-batch organic wines, won the Leadership Award. “Winemaker, wine judge and businessman: there’s nothing Ben doesn’t know about the New Zealand wine industry,” says the awards blurb. “His sense of humour, storytelling and passion for making fine wine are surpassed only by the love he has for his family.” Ben says judging, including as chief judge for this year’s Marlborough Wine Show, Cuisine Magazine’s lead judge and co-chair of the New Zealand Wine of The Year Awards, is part of giving back to the industry he joined in 1998, as assistant to Brent Marris at Wither Hills. Ben was also chair of Pinot Noir 2017, but says establishing The Coterie was probably his most “concrete step” into helping the wine community.

Bell Hill Vineyard winegrowers Marcel Giesen and Sherwyn Veldhuizen won the magazine’s Viticulturist of the Year 2021 Award. Sherwyn says the award validates the “pioneering efforts” that began in 1997, “our old-school values and a continuation of tradition”. The couple sought out the limestone soils of Weka Pass and have been dedicated to a winegrowing ethos of Burgundian viticulture. Sherwyn says their high-vine density (11,363 vines per hectare), dry farming and low yields, under organic farming with biodynamic methods, “all combine to elevate the quality of fruit from which our wines are made”. In recent times, new vineyard plantings and more land have provided additional opportunities for expansion as the pair ramp up their regenerative farming efforts, as part of a movement they consider one of their most exciting developments yet (see page 30). ”Regenerative farming is about working with the land to actively improve it. Organics is about inputs, regenerative practices are about outcomes,” Sherwyn says. “We’re moving away from cultivation to enhancing biodiversity and soil health.”