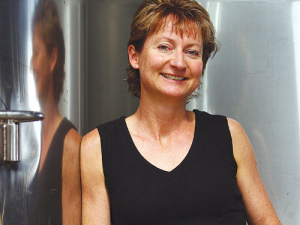 Eveline Fraser’s ascent to the role of Consulting Winemaker in Marlborough has been anything but conventional.

Her path has included; monitoring geysers in Rotorua with the DSIR, becoming New Zealand’s first woman brewer, completing a Post Grad Diploma in Oenologyat Roseworthy, gaining a PADI Dive Master qualification in Riyadh, Saudi Arabia, before coming back to New Zealand as winemaker for the likes of Rapaura Vintners and Cloudy Bay.

These days, Fraser is responsible for making the wine for three small family owned companies in the heart of New Zealand wine country.

It was her love of sciences that saw her head to Massey University to undertake a Food Technology degree. Half way through she was convinced that maybe she should consider concentrating on straight chemistry, which she did. By the time she had completed it, she still had no idea which path she was going to follow. All she knew was she wanted to work in Wellington. So out came the yellow pages of the phone book, and Fraser sent her CV to every company she thought might have an opening for someone with her qualifications.

Her initiative saw her offered a job with Lion’s Wellington Brewery, as part of the Quality Control lab.

“A year later a job came up for a trainee brewer – they had never had a woman in that role – and I was really encouraged by the brewing staff (all men) to apply. I got the job and became New Zealand’s first woman brewer.”

Four years later, the Wellington brewery was closing down, and although Fraser was offered a position at one of the many other Lion breweries around the country, she says she turned it down.

“By then I had been bitten by the wine bug, so I took voluntary redundancy and went to Australia to do a Post Grad Diploma at Roseworthy.

While the processes of creating a beer and a wine have quite a few areas in common, Fraser describes the pleasure of working with a raw product and turning it into something that people associate with holidays, relaxation and good times, being an absolute bonus.

“And given wine ages a lot longer than most beers, you can look back over your handiwork for over a decade and enjoy and learn.”

After vintages in the Hunter Valley, and France (working with Jacques Lurton) Fraser ended up in Western Australia in a winemaking role at the Houghton Winery for three years. While she was missing family and friends in New Zealand and knew she wanted to be back in this part of the world, a “little side-trip” saw her heading to Saudi Arabia for two years. Having learned to dive in Perth, she decided to take that love further, becoming a Dive Master, taking groups of fun loving Ex Pats to Jeddah on the West Coast to teach scuba diving both off the beach and overnight trips on boats.

“We did over 100 dives in the Red Sea, it was incredible diving and magic, fun times.”

But the lure of home was great, and after a couple of years she was back in New Zealand determined to pick up her winemaking career. She wanted to remain in the North Island, close to family, so initially she applied to Matua in Auckland to see if they had a job. Given Matua’s relationship with John Belsham who had started Rapaura Vintners in Marlborough, her application ended up on his desk. He let her know there was a job down south, even though she was sure that she didn’t want to be in that part of the country.

“We had a long chat and I said thanks very much, but that is too far away, I don’t want to work down there. I was so adamant about that, that I paid for my own flight down for the interview, because I didn’t want to take advantage.”

But and there is always a but, things changed the moment she stepped off the plane.

“I came down for 24 hours, hopped off the plane, looked around and thought ‘oh yes, this is the place to be’. I am really grateful to John for talking me into coming down here.”

That was 1996 and Fraser has been part of the Marlborough wine scene ever since. She worked for Rapaura Vintners for five years and credits the job and Belsham for the winemaker she has become, along with other fabulous mentors like James Healy and Kevin Judd

“Rapaura Vintners was an intensely busy, fast-moving workplace. John was a fantastic boss and as a youngish management team we all learned so much. There were so many clients, most of them small family owned wineries. So many of the current very successful companies used to work through RVL back then: Daniel Le Brun for tirage, Wither Hills, Saint Clair, Nautilus, Matua.”

In 2001 Fraser headed to Cloudy Bay to work alongside Kevin Judd and James Healy – slightly in awe she admits.

“It is the holy grail that winery, so yes I was in awe. But it was an amazing place to work, the people were so down to earth and so funny. The spirit, team work and modesty of the whole place was really something special.”

For the past nine years Fraser has been what she describes as a “one-man band”. Having left the corporate world, she is now a consultant winemaker, with a small group of long term clients.

“The mix has changed only slightly in nine years. I loved doing some work with Daniel and Adele at No 1 Family Estate for two years and immersing myself in the complexity of finishing sparkling wines for numerous small clients. Another of my clients has been with me since day one of my new era, so it’s been a pleasure having mostly long-term involvements with the same vineyard sites, business owners and teams who are in it for the long haul.

“I feel really lucky, what I can do and how I can do it. It is so liberating.”

The man behind the establishment of one of New Zealand’s most renowned wineries has received Australia’s top honour.