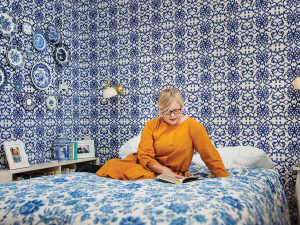 Astrolabe is a sponsor, and Jane an interviewer, for the annual Marlborough Book Festival. Photo Jim Tannock.

When Jane Forrest told her father she was heading to South Australia so her new fiancé could make wine, he though they were “crazy”. It wasn’t their 1982 move from Christchurch to Adelaide that worried him, or the fact she was marrying at 22, or that - the first in her family to go to University - she was transferring her degree. But the winemaking part was a definite concern, he told Jane, years later. “It just wasn’t a thing in New Zealand,” she says. “But we were young and it seemed interesting and exciting and off we went. And it was an amazing time.”

Fast forward 38 years, and Jane and Simon Waghorn’s Marlborough wine company Astrolabe has deep roots, an enviable reputation and two of their three daughters at the helm. That succession plan was something the couple never dreamed of as they set off on a wine journey as students, or when they established their own business as a sideline two decades ago. “It never occurred to us, even once, that it would be a family business,” says Jane, a month after passing the General Manager role to her daughter Libby.

Jane grew up in Timaru and went to university at Canterbury, “where I met a boy called Simon Waghorn”. She was studying history and had a vague notion of becoming a journalist. He was studying botany, was a self-proclaimed ‘seaweed geek’, and wanted to be a fisherman. That career plan changed thanks to a student job in a bottle shop, and by 1982 he had a vintage job at Yalumba.

The couple married and moved to Australia, and Jane went on to finish her degree at Flinders University, then to undertake a post-graduate degree in library studies, while Simon studied winemaking at Roseworthy. Three years after they shifted their lives away from New Zealand, the arrival of their first daughter Meg (known by the Waghorn family as the Barossa Baby) shifted them back again. “We thought it wouldn’t change our lives, but it did,” says Jane.

Simon got a job at Cooks Winery and they moved to Te Kauwhata, where Jane did some work at the Huntly Public Library and their second daughter Libby (the Müller-Thurgau Baby) was born in the back seat of their car, at the traffic lights. Delivering her own child was “cool… retrospectively”, and set Jane on a new career path, involved in antenatal education.

She carried that on when they moved to Gisborne and Corbans, where they welcomed third daughter Arabella - the Chardonnay Baby, of course, because at that time Simon was forging a name at for the variety. “It was his first big break,” says Jane, but it was also a “crossroads” for the family. “Simon was in charge of a very large winemaking facility, we were in Gisborne and all our family was in the South Island.”

They were keen to return south and Simon wanted a more hands-on position, she says. So when the couple met Greg and Sue White of Whitehaven Wines, and Simon was offered the position of Foundation Winemaker, they moved to Blenheim. That was January 1995, “and it rained and it rained and it rained until June”, says Jane. It was nonetheless an “amazing time”, she says, recalling her young daughters plunging pinot in their togs and scampering around the small Whitehaven winery. A year after they arrived, Jane and Simon established Astrolabe with some university friends, as a small and autonomous side project. “In 1996 the industry was much smaller, but was starting to burgeon overseas,” says Jane. The world had whet its appetite for Sauvignon Blanc, “and we were lucky that we were part of that”.

Meanwhile, Jane became a sexuality educator at Family Planning and discovered a joy in working with teenagers. A post-graduate course in teaching followed, but on her last study placement she realised her place was with new entrant school children. Jane went on to work at Springlands School and loved it, cherishing the opportunity to introduce 5-year-olds to reading. “They are so excited by education and it’s just the most magic stage.”

Being part of that is “just incredible” but, because the woman clearly likes to stay on her toes, Jane took on the role of Marlborough’s Children’s Librarian in 2002. It was another cherished role. “The beautiful thing about the library is there are no barriers. I loved that access to information. I loved the power of the library to provide access to education but also to literacy.” It was the time of Harry Potter’s introduction to the world, which made it even more exciting. “That was wonderful.”

But in 2006, a year after the couple bought their own vineyard, Jane decided it was time to commit to Astrolabe, which had unexpectedly spiraled into a vibrant business, far from the moonlighting they had envisioned. Her role from there on in included everything but growing and making the wine, from marketing to exports. “It was quite challenging and all consuming.” She missed the social commitment of education, but it was “lovely” growing grapes and living on the Astrolabe Farm vineyard. “And I really enjoyed the story telling and entertaining, hospitality side of it. That felt good and exciting.”

In 2009, Simon followed her lead, leaving Whitehaven to work full-time in the business. There were plenty of risks along the way – “a risk to living in Marlborough, a risk to starting Astrolabe, and a risk to Simon giving up work to focus on it” - but he had a clear vision in terms of the wines, and the opportunities have been plentiful, says Jane.

Four years ago she became General Manager at Astrolabe, and the Waghorns began to look at Astrolabe closely, working with New Zealand Trade and Enterprise (NZTE) to distill the essence of their story. “We said, ‘if we are going to have a business, how do we want it to work?’ Simon’s winemaking was the fundamental core to that – the uncompromising quality of the wine - but it was also about how we live on the land and the importance of relationships and the value of being part of the community,” says Jane. They farm the home block organically, forging a strong relationship with the land, and are committed to fair dealings with partners and growers, forging strong relationships with people too. “It’s about integrity in every aspect,” she adds.

When Astrolabe’s founding partners wanted to retire from the business, a friend asked Jane whether they’d considered inviting their daughters to invest and be involved. “I was shocked,” she says. But when she tentatively asked, they all put up their hands. Meg isn’t involved on the ground, but Arabella (pg 55) manages marketing and is apprenticing to Simon, while Libby has just taken over as General Manager. It’s been a “fundamental change”, says Jane.  “Initially it felt like a huge responsibility. It’s all very well if Simon and I take risks. But to put your children and grandchildren’s future into the mix is a burden of responsibility.”

However, a few months in, and it’s already feeling embedded and “really exciting”, she says, chuffed to have three of her five grandchildren in Marlborough, and her daughters’ individual strengths brought to the business. The family had worked with NZTE on succession planning and had scheduled a handover to Libby on 1 July. But when Covid-19 hit, they got advice on managing through a crisis, including the importance of clarity of leadership. “I thought, we have to do this now… we need people to know that yes, this is tough, but we are here for the long haul.”

Arabella has long had an aesthetic influence on the company, including the new branding for Astrolabe and Durvillea (the latter a nod to Simon’s seaweed geek roots). And now Libby’s “clarity of thought, intelligence, perspective and understanding” have made their mark as well. “I don’t think I realised how much my children knew about the wine industry. It was sort of like osmosis really,” Jane says, recalling their lives immersed in wine – sometimes literally, emerging pink-tinged after floating around in open top fermenters of Pinot Noir.

Jane is now spending less time at the office and more time on the home vineyard, where she’s part of a group of growers working on a waterway restoration (“that’s really exciting”) and focusing on Astrolabe’s sustainability and organics programmes. “Those are the thing I am really interested in now.”

New Zealand meat businesses are being asked to contribute to a global study on gender equality.