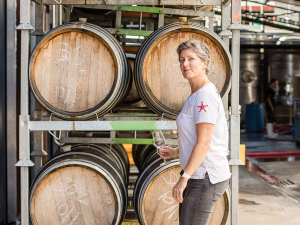 “I think we are so lucky to have a wine that took our country to the world,” says the founder of Jules Taylor Wines. “I love its vibrancy and everything about it. I love tasting those berries during vintage, and imagining how great they will taste in the glass.”

When Jules launched her eponymous label in 2001, with begged grapes, borrowed winery and 400 cases of wine, she was moonlighting for the fun of it. “I never imagined this would feed my (then) non-existent family and I certainly didn’t think I could ever give up my real job,” she says. But 19 years on, Jules Taylor Wines is a household name in markets around the world, and a full-time gig that certainly keeps her family fed, though occasionally called on to bud rub for their supper.

Jules grew up in Marlborough, surrounded by a wine industry that was growing up too. By the time she left to do a Bachelor of Science at Canterbury University, vineyard expansions were cranking and the world had a taste for Malborough Sauvignon Blanc. Jules was also getting a taste for it, while studying plant and microbial science and zoology, satisfying a penchant for bugs, growing things and cutting things up. “I still love all those things and looking at all different sorts of ecosystems and how change influences them.”

In 1993, with a degree in hand, she vetoed thoughts of doing her Masters, and instead went to Lincoln University to study wine. Her plan was to work in viticulture, but it took a single vintage to become “mesmerised” by winemaking, and the ability to turn a raw material into something completely different, “with a whole new shape and form”. She was also immediately attracted to the “craziness and stress and excitement and camaraderie of vintage”, she says, on the cusp of another harvest. “I still get excited by it.”

With her wine studies completed, Jules worked in vineyards and at the Wairau River Wines cellar door, but spent plenty of time across the road at the new Vintech winery led by winemaker John Belsham. “I just hounded him really,” says Jules. “Like in any industry, getting your first job is the hardest. In the end I just said, ‘I need a chance’.” John gave it to her (for which she remains thankful) while warning of the relentless nature of the work, and Jules threw herself at a dauntingly steep learning curve. “It was awesome, but tough,” she says, admitting to doubts halfway through vintage. “I found it really stressful.”

She stayed the course and conquered the curve, but after 18 months decided it was time to see more of the wine world. Jules set off for northern Italy, launching a lifelong “love affair with all things Italian”. Nine Italian vintages followed, including five in Sicily, interspersed with Marlborough harvests. In the 1997 Marlborough vintage, she was working at Cloudy Bay, just down the road from Allan Scott vintage worker George Elworthy - these days father to their two boys Nico and Louis, and manager of Jules Taylor Wines.

They continued their Italian vintages together, but in 2000 Jules got her “big break”, taking on a winemaking role at Marlborough Valley Cellars, with Saint Clair, Kim Crawford and Cape Campbell Wines. Winemaking opportunities were emerging around the region, so her mentors - including winemaking legends Kim Crawford, Simon Waghorn and Matt Thomson - encouraged her to stay with the contract winery and forge her own label on the side. “So in 2001, my second vintage there, I made a tiny 400 cases in two varieties.”

Working at Marlborough Valley Cellars gave Jules precious insights into what grew best where, because such a cross-section of the region’s grapes came across its presses. “We saw fruit from so many different areas. And we had the ability to ferment everything separately - to look at the vineyards and taste the wine and then to think, ‘oh yeah that’s what that region gives you in terms of its flavour profile’.” She explored the nuance and character of pockets of land in the Wairau and Awatere Valleys, and found what she liked - and didn’t like - from each.

Marlborough Valley Cellars fully funded the early days of Jules Taylor Wines, including fruit, winemaking and packaging. “It was tiny,” says Jules. “If it didn’t get drunk we were going to have a bloody great Christmas the next year.” But in 2006 Kim Crawford and Saint Clair decided they were big enough to occupy their own space, so Jules and George had to decide the future of their nascent label - “either call it quits or buy all the stock”. They chose the latter and set about finding growers who would trust their cheque book. It was a tough road, she says. “We lost out on little blocks of land to bigger, more established companies… It took a long time to earn people’s trust.”

But earn it they did, and as Jules Taylor Wines grew its reputation, its namesake was able to get more of the fruit she loved, some of it from tiny producers with less than a hectare of grapes. While they have their own estate vineyard now to add to the mix, she remains committed to their grower model, and the ability to choose the best sites and fruit for her wine. “There’s no way, even if we won the lottery and had the desire, that we could own all those little pockets.”

Site diversity is especially important with Sauvignon Blanc, Jules says. “I am convinced that blending from multiple vineyards from different subregions gives you a much more interesting, well-rounded wine with lots of different flavour profiles that aren’t competing, but enhance each other.” She compares a single source Sauvignon to a fruit salad made only from pineapple. “It’s really boring. But if you have a little bit of pineapple, a bit of lime juice and some jalapeno - I get that from some of the fruit in the lower Dashwood - with pepper and tomato stalk, then yum.”

Sauvignon Blanc is a grape variety with “amazing innate flavour on the vine”, she says. “If you pick it at the right time, you can’t stuff it up.” A classic Marlborough Sauvignon Blanc is all about fruit, site selection and picking date, she adds. “The rest of it is not that difficult.”

Jules has been full-time in the business since 2008, having worked for Constellation and consulted to other companies. “It took a long time to get to the stage where I felt comfortable leaving a real job with a real salary,” she says. There are still plenty of challenges, and she puts climate change high among them, but the company’s small size allows them to be more agile than many, in the market and the vineyards. As they’ve grown, the culture of Jules Taylor Wines has stayed true, Jules says. “We have tried to keep it fun. We are serious about it but you have to have fun, otherwise what is the point?”