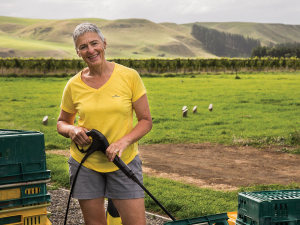 She describes herself as a bit of a rebel who didn't thrive academically at school, but she climbs mountains, co-owns a winery, has a viticulture diploma and, perhaps most importantly to her, a BA in Public Policy and Women's Studies.

"Growing up in New Zealand in the 70s, it was so sexist and there was just no presence for women in sport," says the founder of Big Sky Wines in the Wairarapa. "It was so male dominated. I used to get so angry about how sexist New Zealand was and always wanted to do something for women."

Katherine and her partner Jeremy Corban make a formidable couple, professional and personally. She was born in Māngere and he in West Auckland. He is from one of New Zealand's best known wine families and has always harboured a desire to make wine, while she forged her career empowering women, a role she has played with gusto everywhere from Zimbabwe to New Zealand.

When she travelled to Zimbabwe alone in 1993 it was a relatively good time to be there, she says, although security did plague her. "I lived in a nice house in a little town called Gwanda of 10,000 people, all black, and me. I was worried about security, but the Zimbabwean people are really peaceful. And as I worked with women to help them start small businesses, I wasn't seen as a threat, but rather as a potential way to help people out of poverty."

Jeremy arrived about a year later, having finished his master's degree in public policy, and they both stayed in Africa for another three years, travelling extensively and climbing Mount Kilimanjaro, among other adventures. When they returned to Wellington, Katherine moved into not-for-profit work, initially at the YWCA to set up a programme for young women looking at their career choices when they left school.

She went on to work for the Red Cross, married Jeremy, had their first child - a daughter called Grace - and worked part-time. The family then moved to Paris for three years, where Jeremy worked as the New Zealand Representative for the OECD while she studied viticulture and winemaking remotely via the Eastern Institute of Technology in Hawke's Bay, which involved travel back to New Zealand for block courses. "I learnt that viticulture is really where wine starts," she says. "There are so many decisions about how you approach viticulture, so having that base knowledge is something I was really thankful for. It's good to know why you're making decisions about how the vines are managed and to develop your approach from there."

Back in France, she supplemented studies with work as a cellar hand at Chateau de Seuil in Bordeaux. "There were so many different grape varieties there and I lived with the family who owned the winery, learning about the logistics of running it and being immersed in the culture."

She and Jeremy poured their personal time into visiting cellar doors, wine regions, and eating French food. "We had the Michelin Guide and used it, but a lot of the food was terribly indigestible for me. I preferred the more rustic food." When they returned to New Zealand, they went straight to Martinborough. "We came over here in the 1990s and liked what we saw. Jeremy had been driven to have land and grow grapes. It's about being a guardian of the land for him, a kaitiaki."

It took them four years to land on Te Muna Road, nine kilometres out of town, where they called their vineyard Big Sky. It's an apt description of how it feels to stand and look at the vastness of the sky from their remote spot, outside the Martinborough village community.

This year, Big Sky's vineyards became certified organic, with the wind and lack of humidity of Te Muna making it a relatively smooth transition, says Katherine. The vast majority of their production is Pinot Noir, which reflects both the region and the vineyard make up when they first arrived. When they initially bought their eight-hectare site, 5ha were planted - four in Pinot Noir and one in Sauvignon Blanc. They have since added more grapes, but remain undecided on whether to plant additional vineyard land in front of their home. "We are currently selling all our wine, so we're working towards being a bigger company," says Katherine. "But it's also important to make the best wine we can, with incremental changes each year."

She retains a love of viticulture and being outside, but her main focus today is building Big Sky's sales. It's a "luxury" to live in Martinborough, she says. "It's fun. Jeremy and I have such different skills. He's so good at winemaking and looking at the finance of the business. I'm good at building up the export side of the business."

And it's a community she cherishes. "I had an amazing conversation at the tip the other day with a winemaker; a deep conversation about life. Being part of the wine community here is really nice."

Women in Wine: Spring Timlin on mentorship not martyrdom

The steep trajectory of Spring Timlin's winemaking career was fuelled by mentorship at Matua, where "no question is a silly question", she says.