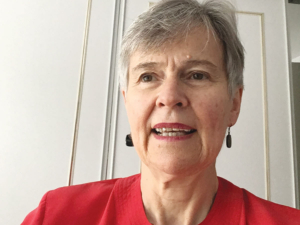 Because Harvey was one of the first and most influential stalwarts of New Zealand wine’s export push into the UK.

Born in New Zealand, Harvey left for her O.E in the 70s, working as a pharmacist in London for a number of years. Having an interest in wine, (she had worked as a locum in Henderson  so knew a lot of the winegrowers in the area) she quickly began learning more. Undertaking WSET levels and joining the International Wine and Food Society, her interest grew exponentially – to the point that she began considering undertaking the Master of Wine exam.

Only problem at that period in time, was to do so, she had to either write about wine or be a member of the wine trade.

“I did neither of those, so I thought I had better change that. I had always thought New Zealand had great potential for its wine and I thought I might just bring a few cases over and test the market.”

She wasn’t the very first to bring New Zealand wine into the market – John Avery of Bristol had claimed that title. But Harvey followed close behind.

The year was 1986 and her first shipment was 100 cases. It was a mixed import, Matua Valley, Delegat’s, Morton Estate, some Vidal and a little bit of Stonyridge.

“I brought 100 cases of wine in and then thought – I don’t know what I am going to do with it. I can’t just sit and drink it all – much as I would have liked to.”

Enter Philip Atkinson from the trade section at New Zealand House. Knowing she had the cases of New Zealand wine, he phoned Harvey and gave her a contact number for John Tovey, renowned restauranteur and chef at the Miller Howe Windermere in the Lakes District.

Tovey had decided, ironically after the Rainbow Warrior bombing in New Zealand, that he would no longer serve French wines in his restaurant. Initially he began replacing them with Australian wine, but as they became more mainstream, he moved onto South African. But once a trade ban came in that prohibited the import of South African wines, Tovey had to rethink – again. He had heard some rumors about New Zealand wine and made contact with New Zealand House – who then passed the info onto Harvey.

“So I called him up and he said; ‘tell you what my dear, send me a sample bottle of everything you’ve got and send me a bill.’”

He loved the samples and within two days of receiving them, he rang Harvey, asked her how many cases she had and then bought the entire lot.

“I couldn’t believe it. I had 100 cases of wine one day and five days later I had none.”
She says Tovey became a great proponent of New Zealand and was the impetus for her establishing her own import agency New Zealand Fine Wines. The fact Tovey had been her first client made the next step of getting our wines into the market, a whole lot easier she says.

“When I went to see a new customer, they would always ask who I was selling to. I would immediately say John Tovey and they would go; ‘Oh if John Tovey is buying it, we will definitely buy some.’ So he was my passport.”

Harvey always intended Fine Wines to be a one person business. She also realised that the companies who had been her initial clients would probably need to move on, once they began to secure a market presence.

“I realised once the momentum started with these companies they needed to grow. I appreciated the fact they would want to leave me sooner or later – they would want their own importer just selling and showcasing their wines. I looked upon it as growing pains.”

So Harvey decided after a suggestion from her brother, that she should have her own label, something she could call her own.

“I thought about that for a while and thought that’s not a bad idea.”

Aotea Wines was born, with Hermann Seifried (one of her clients) making the Sauvignon Blanc, some Chardonnay and Syrah. The label continued until Harvey’s retirement in 2009 when Seifried’s bought the rights to the label. It is still found in some prestigious outlets within the UK.

By this stage Harvey had passed her Master of Wine Exam in 1991. She was New Zealand’s first woman to achieve the title, and went on to write for numerous publications and judge at a number of wine shows.

But her greatest emphasis was on promoting New Zealand wine whenever she could. And it wasn’t always easy.

While people were always nostalgic about New Zealand, equating it with somewhere they wanted to visit, the fact we made wine was something of a misnomer.

“Oh gosh, are you making wine?,” being a common response she says. But over time that sell became much easier.

“When I started doing these wine tastings I was doing about three or four a week. I would come into the room and give a bit of history about myself and I would say has anyone been to New Zealand. And out of about 30 or 40 people, there may be one or two hands go up. Fast track to 2001 when I was still out there showcasing the wines, I would ask the same question and nearly every hand would go up.”
The fact New Zealand made wine and good wine too, was no longer a hard sell. People knew about us.

Harvey is one of those who helped ensure that information was out there.

Still domiciled in London, she is now well retired, but continues to be one of our greatest advocates.

“Amongst my friends and their friends, I am always talking about New Zealand wines. And I only serve it when I have people round for dinner.

Margaret Harvey’s dedication to the New Zealand wine industry has not gone unnoticed over the years. In 1997, she was awarded the New Zealand Order of Merit for services to New Zealand wine. In 2005 New Zealand Winegrowers also showed their appreciation for all she had done to help establish an export market in the UK, by making her an Honorary Life Member.

Oliver Styles spoke to owner and founder of Domaine Dujac, Jenny Dobson. Here's what he found out.

The reasons for applying to be part of the Women in Wine mentoring programme may have differed for the 16 women taking part, but the outcomes were all the same. Success.

“Falling in love with flavour” is how Angela Clifford ended up in the world of wine.