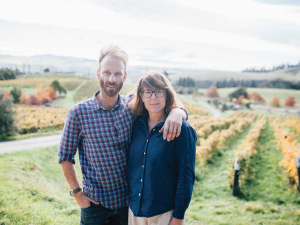 “I grew up wanting to work in an office because I spent all my life with plants and soil,” says the co-owner of Black Estate Wines in North Canterbury and co-chair of Pinot Noir NZ 2022. “Then I married a soil guy, unknowingly.”

Pen (the daughter of a fifth-generation horticulturist) met Nicholas Brown (the soil guy) when she was 17, on Christmas Eve at iconic Christchurch bar Dux de Lux. “I thought, he looks cool, but then the pub closed… I met him properly back in Dunedin when we were both uni students.”

When Pen finished her degree, she moved to Auckland – the city she had longed for – and Nicholas stayed on in Dunedin for a further year. “Then he came up to join me and that is how he got into the wine industry, because he took any job he could get at the time, which just happened to be as a sales cadet for Montana.” That led to an all-encompassing love of wine for both Pen and Nicholas, and saw him head to Lincoln University to retrain as a winemaker.

Pen went to Amsterdam for work, and she and Nicholas would meet up when he travelled for northern hemisphere vintages. She was on extended leave for an Italian vintage, when struck by an epiphany around rural living. “We lived in Tuscany for two months at Isole e Olena vineyard,” Pen says. “I was a lawyer at the time, but I thought, I could live in the country, this is a good life.”

After returning to New Zealand, she jumped at her parents’ idea of co-investing in some land. “My parents had seen Nicholas’s passion for wine and my interest in business, so they were keen. Nicholas was the only one in the family who knew anything about wine, and he was adamant that North Canterbury was the region to be, with its soils and climate.”

Black Estate was purchased in 2007, just weeks after Pen and Nicholas’s daughter Sylvia was born. Pen continued to work part-time as a lawyer in Christchurch, but every weekend she and Nicholas would head to the vineyard to work, supporting their brother in law Alistair - the sole paid employee of the project - while Sylvia slept in the back of the truck. “Everyone says, ‘when you get into business, if you knew what was coming you would never do it’,” says Pen. “But when you have an opportunity like we had, you have to say ‘yes’. Even though you may be pregnant or wondering how you are going to fund it all. That was probably the best lesson in life - to just take it on and never look back.”

After five years of to-ing and fro-ing, plus the arrival of second child Arthur, the family finally moved to an apartment onsite, next to a simplistic cellar door and restaurant, built to take in views of vines and mountains. Pen had no hospitality background and admits she and Nicholas were far more focussed on the wine and terroir than potential visitors.

“Dad was really into wine tourism, which at the start we were not that fazed with,” she says. “But we appreciated that we would have much better cash flow if we could sell our wine direct to customers on site, and we loved the local food community we had met.” Her motivation was the brand, she adds. “We had just come out of the GFC (global financial crisis) and I knew that for a small vineyard to start to get known, it would be helpful to have a hospitality space.”

Pen didn’t realise how hard it would be, or how dynamic, but once the doors opened, she found her niche. “We surrounded ourselves with friends and people who knew what they were doing and let them teach us. It was challenging but fun.” She took to it swiftly, and since opening in late 2012, Black Estate has taken out Cuisine’s Vineyard Restaurant of the Year twice, won two hats and received numerous other awards.

Then along came Covid 19. Having endured the GFC, the Christchurch earthquakes, and the Kaikōura earthquake, the pandemic that saw all of New Zealand go into lockdown for six weeks could well have been the last straw. But instead of throwing in the towel, Pen and the team began looking at ways of changing their approach to visitors.

A week before the country came out of lockdown into Alert Level 2, which allowed restaurants to open again, they came up with the idea of opening a pie cart on site. “That was so people who were concerned about being too close to others could still enjoy a delicious organic pie that our chef has perfected, with a glass of wine and the joy of nature. They can sit outside and take in the view of the mountains and the vineyard.”

With a fire, rugs and hot water bottles keeping the chill at bay, the idea has been a roaring success and has welcomed more of the community to drop in. So much so, that it will remain an integral part of Black Estate’s restaurant in the future. “It has resonated with people, the ability to get out into the countryside for lunch, but not have to book or commit to a full three-hour lunch,” she says. The a la carte menu continues to operate within the restaurant as well.

And while international tourism is off the cards for some time yet, Pen says the surge of domestic travelers has been a boon. “We are really surprised there are all these people from Christchurch and wider New Zealand coming up who have never been before or even heard of us. We thought we were pretty well known by now. From a marketing point of view, that is something I would share for everybody’s business - never take for granted everyone knows you exist, just because you have been around a while or have won awards.”

Pen believes cellar doors and wineries have a once in a lifetime opportunity to educate New Zealanders during this uncertain time of international travel. “They are so proud of us and they love supporting local. If your winery and cellar door is genuine and you have someone lovely there to chat about
what you are doing on your land, it is an amazing opportunity to educate and share your story.”

Meanwhile, Pen is hanging out for Pinot Noir NZ 2022, postponed by a year because of Covid-19. The hard work has been done, the foundations laid and international guests are ready and waiting to come once the pandemic is over, she says. “It’s going to be a hell of a party.”

Don Galletly's Loch Ness dairy farm on the Emu Plain, near Waiau, remains the only one in North Canterbury unable to milk since the November 14 quake.

Some North Canterbury farmers are daring to hope the worst of the region’s record-breaking drought is over.

The 'medium scale' drought gripping the east coast of the South Island is now officially the longest on record, and this classification is now extended to the end of the year.