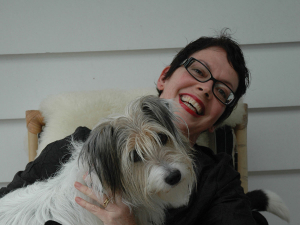 Ruby Andrew with her dog Annie.

When the New Zealand wine industry wants to translate technical data and scientific language into plain English, they tend to call on Ruby Andrew.

Despite having a background in feature writing and editing magazines that dealt with business in her home country of Canada, Ruby has managed to cross the divide to scientific writing apparently seamlessly. “Although moving from the business world to the research of the wine industry might seem a long leap, it was at an accounting magazine that I first learned how to craft technical pieces that were easily understood by non-specialists,” she says.

Transferring technical speak into layman’s terms can be straightforward, but it can also be “like hitting your head against a brick wall”, she says. “Sometimes researchers have resisted how simple or plain I want a message to be. But I have never heard back from industry members that a fact sheet was too simple – if anything, some people would prefer them to be shorter still.”

Ruby’s link to the wine industry goes back to the late 1990s, when she met New Zealand wine scientist Dr Rod Bonfiglioli in Canada. Rod was renowned in New Zealand for his scientific wine research and was often referred to as Dr Rod.

“Rod’s idea of a holiday was to work in some lab overseas, every year. He worked in my best friend’s laboratory on Vancouver Island, which is how we met.”

After years of a long-distance friendship with Rod that turned into a romance, Ruby moved to New Zealand in 2001, where he had just taken on a full-time role at Riversun Nursery and Linnaeus Laboratory as their director of vine health.

It wasn’t long before Ruby’s writing skills were utilised by Riversun, to help get the word out about their importation of new varieties. When Rod died in 2009, Ruby took on the communications role of his last project, one he had initiated and sought funding for, on Grapevine leafroll-associated virus 3 elimination. Despite the many other programmes she would work on over the next decade, Ruby still considers this one of the most important she has been involved in.

“I think, and the industry would possibly agree, that the virus elimination project was the star,” she says. “Because it reached industry on so many different levels. I am confident it has made a lasting difference. And of course, it is very, very dear to my heart because that was Rod’s area of expertise.”

In 2013, Simon Hooker, who was then the Research Manager for New Zealand Winegrowers (NZW), employed Ruby to break down and communicate the results from research programmes that could be of use to the industry. That has included communications on some of NZW’s largest initiatives, such as the Lighter Wines and Vineyard Ecosystems programmes. She has also co-authored books on managing botrytis and frost control in New Zealand vineyards.

As for the future, Ruby admits she has been rethinking that of late. “I had assumed a year or two ago that my best-by date was coming up fairly shortly. But now I am not sure. I think there is always going to be a space for the written word. It may be on an app instead of in a magazine, but the same craft will be involved – creating easy messages for the industry to understand.”

Women in Wine: Living to the edge of the canvas

Wine has been a supporting act in much of Sophie Parker-Thomson’s life, but the Master of Wine credits a dinner out in Dunedin as making it centre stage.

Women in Wine: Misha Wilkinson on hitting the high notes

Misha Wilkinson grew up with the Australian Opera, sitting in her mother’s dressing room, or poised at the edge of the curtain as Gloria McDonall performed.