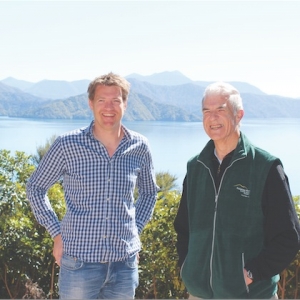 A unique partnership between a Marlborough Sounds wildlife sanctuary and a major wine company is helping develop a slice of nature right on the doorstep of the township of Picton.

Kaipupu Point Sounds Wildlife Sanctuaryis a 40-hectare headland of native bush that volunteers have worked tirelessly to make predator free. That task will become slightly easier now that Mud House Wines have signed up as a Rimu (major) sponsor.

Chairman of the Kaipupu Point Mainland Island Society, Barry Maister, says the 40 hectares has had an interesting history, with the port side having been the base for the local freezing works from 1902 to 1983. While there is a large portion of original virgin forest on the headland, the rest had been scoured of bush and used as the works’ farmland. Introduced pests such as rats, possums, and cats ran free, wreaking havoc on the native wildlife in the area.

In 2005 the land which is owned jointly by Port Marlborough and DOC, was  placed into a trust with the aim of establishing a sanctuary. Since then, the volunteers have established a predator free fence, undertaken massive pest trappings and are now as close to being rat, stoat, possum, cat and mouse free as is possible, given the location so close to the township of Picton. Walkways through the bush have been created, and an educational programme with local schools is underway.

Birdlife has increased, native plantings have been undertaken and regenerating bush is thriving. This year the Sanctuary is keen to reintroduce native species onto the site, with South Island Robins likely to be the first translocation. But none of that happens without major sponsorship, Maister says.

Sales and Marketing Manager for Mud House Wines, Jack Glover, says there is a natural fit between them and Kaipupu Point.

“We spent a great a deal of time thinking about what Mud House stands for, its values and personality,” he says. “We wanted to give value back to the community, via something that is lasting. To me Kaipupu is at a threshold, it is going to go up and up. I can see it growing and delivering back to Picton and the greater Marlborough region.”

Some of the sponsorship funds have already been used to clear an elevated viewing area, where a hand crafted table and seating have been placed.

Glover says the company will also provide funds to allow the Trust to take people to the sanctuary (which is only accessible by water) and will donate wine for future fundraising events.  The remainder of the sponsorship funding goes towards ongoing pest eradication, track maintenance and restoration of flora and fauna.