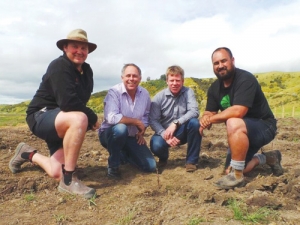 The first vines go into the ground at Leefield Station.

Foraging, hunting and food will have as much resonance as wine when Brent Marris has completed his project at Leefield Station in Marlborough.

Timing is everything when 2000 hectares of prime vineyard land are up for grabs, the world is emerging from a global financial crisis and your Marlborough wine brand is reaching sales targets ahead of time.

Marlborough winemaker Brent Marris was as surprised as anybody that he hit five year growth targets in just two years, particularly since this took place through the global financial crisis that began in 2008. The question that arose as a result of this success was: should the company continue to expand?

"We looked at how well the Ned brand and the Kings Series was going when we took the decision to buy the Leefield Station," Marris recalls.

The Station came up for sale in October 2012. He remembered the land from his childhood in Marlborough and the fact that it was within a four kilometre radius of his own winery meant that it was ideally situated for planned vineyard expansion. Not only that; the Station is a north facing, rolling hill country site.

These two factors were significant drawcards to Marris because the land's aspect means that it maximises sunshine for vines in Marlborough. Its rolling hillside sites enables the exploration of grape varieties such as Syrah, which Marris is considering planting on an experimental basis on warmer sites at the Station.

Not withstanding all of these drawcards, the purchase of 2000 hectares remained a risky proposition, not least due to the sheer size of the property.

"I knew our brands were growing and as the site is so close to our winery, Rosemary and I felt that it was clearly the piece of land that we needed to own," Marris recalls.

Conviction is one thing. The management team of Marisco Wines is another.

"When I asked my management team what they would like to do, the consensus was to continue growing and to control our own destiny. This means that we need to own our vineyards, process our own fruit and continue to work with markets on a face to face basis. This meant that Rosemary and I had to buy more land."

So, in went a (completely confidential) tender for Leefield Station.

"I couldn't let anybody know what I was considering because the land price would have risen immediately," Marris says.

The purchase went through and the rest is a story that has yet to fully unfold.

Part of its unfolding will be into a park that will see wine and food intrinsically linked, says Marris.

All up, 600 of the 2000 hectare site are destined for vines, which will be spread across 800 hectares, due to rivers, streams and headlands on the property. Then there is the concept of a vineyard park which, as its name implies, is wider than mere grapevines. The concept is to create a synchronistic business expansion, which facilitates two other lynchpins in the Leefield story: a wine and food journey for visitors to the site and a legacy for the Marris family.

The word Marlborough evokes transparent turquoise images of balmy summer days cruising on the Sounds; an experience that Marris has shared with visitors in the region. Now he plans to add another string to that outdoor bow, by introducing foraging and hunting to the Leefield Station.

The land already has a significant stand of 70 to 100-year-old walnut trees and he plans to add bees to the property to make honey. The vineyard park plans also include hunting as a key focus of the site because of its plentiful supply of wild boar, wild goats and wild venison as well as dairy cattle and sheep; both of which are farmed there.

To this rolling hill country, Marris says he will add both an Angus stud and a Romney stud.

There will be a colour coding system at Leefield Station, which will pay homage to the traditional colours of farming sheds in the region and also differentiate the site's non-farming buildings. The colour code will take place across the entire property.

A new 300 million litre dam was completed in December.

If it all seems to have happened swiftly, Marris is keen to provide the perspective to observers that this project has been under consideration for several years now.

"I'm lucky that Rosemary (his wife) is extremely supportive so that I can have my cell phone turned off while driving around the site, looking at it, getting to know the lie of the land – literally – and seeing what is happening in order to discover new enclaves of land up here. I'm also thankful to have Siobhan and Anton (his viticulturists) who are an integral part of this journey."