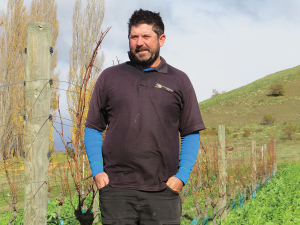 His career began at Felton Road and he worked his way up the ranks before becoming viticulturist at Peregrine Wines.

These days Paulin is working for Aotearoa New Zealand Fine Wine Estates (AONZ), as their Estate Manager for Lowburn Ferry in Central Otago, and Biodynamic/Organics Manager at Pyramid Valley, travelling to Waipara for one week in each month. It is a dream job given his career has been dedicated to organic winegrowing since graduating.

Earlier this year he stepped up to the role of chairman of the Central Otago Winegrowers Association, adding to his portfolio of other leadership roles taken on since winning the prestigious Bayer Young Viticulturist of the Year Competition in 2011. He has organised the Central Otago regional competitions for the past nine years, and sits on the national committee.

He is also helps with the Tonnellerie de Mercurey Young Winemaker of the Year competition and sits on the national executive committee of Organic Winegrowers New Zealand. In 2016 Paulin won the Central Otago Young Gun award acknowledging his leadership skills.

Those many contributions to the wine industry and potential to take it further may be internationally recognised. From 600 nominations Paulin has been shortlisted for inclusion in the new international ‘Future 50’ awards, launched this year by the Wine & Spirit Education Trust (WSET) & the International Wine & Spirit Competition (IWSC) as part of their respective 50th anniversary celebrations.

Their goal is to “unearth the industry’s up and coming talent” and champion on a global platform 50 young professionals and leaders shaping the future of the wine industry.

Nicky Grandorge, Leadership & Communities Manager for New Zealand Winegrowers, who nominated Paulin for the ‘Future 50’ award, says at 35, he is showing signs of a great leader.

The international judges will spend the next few months interviewing and discussing those on the shortlist and the ‘Future 50’ will be announced in November.

Being nominated for the ‘Future 50’ award was personal recognition for hard work over the years and is a motivating factor going forward, Paulin says.

As for his new role with AONZ, Paulin says Lowburn Ferry and Pyramid Valley are two properties purchased in the last three years with the New Zealand Government’s Overseas Investment Office approval.  AONZ was co-founded by New Zealander Steve Smith MW, and Brian Sheth, an investor and wildlife conservationist from Austin, Texas.

The company’s philosophy is to create two biodynamic estates in the South Island which would produce the best wines possible. He says AONZ is privileged to be custodian of both properties and he personally was attracted to the job as the focus is entirely on quality.

“But it has to be sustainable, not just the environment... there’s checks and balances.   The business has to stand up as a business entity.”

Paulin is keen to see whether vine density is more influential on the final wine than management of the vines.  “If there’s more competition between the vines, then there’s more complexity at a younger age – from what I’ve seen – then it’s potentially a more efficient use of space.

“Pinot Noir is a very transparent variety, and when you get it wrong, it shows up.  So, we’re going to challenge the classic six tonnes per hectare by seeing if we can ripen more grapes per hectare by having more leaf area.”

With only limited land available to them for planting, the company needs to find the balance between planting density, costs of production, and sales.

Paulin is also experimenting with cover crops and the use of crimping – a technique more often used in organic crop farming than viticulture - to roll the cover crop with a crimping roller instead of mowing.  “We’re trying to retain moisture by creating a thatch on top of the soil that stops it drying out…it also retains the biomass instead of mowing it into oblivion.”

Describing his role with AONZ as unique in New Zealand Paulin gets to “do a bit of everything...”  He likens it to the European vigneron who grows, makes and sells their own wines.

“That’s the exciting thing, seeing it through from grapes to wine to marketing.  It’s quite unique within the industry at the moment, without being an owner.  It’s not often you get the chance to do that, working for someone else.”