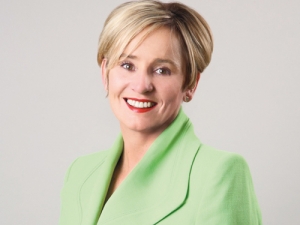 Achieving world renown in less than three decades, is something everyone involved in the Central Otago wine industry is justifiably proud of.

Especially as that renown has come on the back of not only superb wines, but also a dedicated team of volunteers. But the time has come for Central Otago Winegrowers Association (COWA) to take their reputation to another level.

Hence the appointment of the organisation's first General Manager.

COWA President James Dicey says they have appointed Glenys Coughlan to the GM position. She comes with a wealth of experience, including having been the CEO of Positively Wellington Venues for the past five years.

Dicey said Central Otago winegrowers and makers had always been characterised by their passion for making exceptionally good wine and a pioneering spirit that defined them as a wine region.

"We've been blessed with a willing team of volunteers who've worked incredibly hard to establish and promote Central Otago's wine brand and we now own a premium position in the market that we are justifiably proud of. However, the industry doesn't stand still so we need to keep working to retain and enhance the strength of our brand.

"Earlier this year we reached a point where we wanted to ramp up our efforts on behalf of our members and fund a new role within COWA to enable us to take COWA and our region to a new level.

"We're delighted to confirm that we've appointed Glenys, who we're very confident will take COWA to the next level in its development."

Glenys was born and educated in Dunedin and spent many family holidays and university field trips in Central Otago. She's held a number of senior business roles with Air New Zealand in Auckland and Saatchi and Saatchi in Wellington, and was CEO of the New Zealand Tourism Industry Association for five highly transformative years.

Glenys was a shareholder in public relations consultancy the Acumen Group for ten years, where she was responsible for the New Zealand Winegrowers PR and Air New Zealand Wine Awards accounts.

In her most recent role, Glenys is credited with taking Positively Wellington Venues from a council-subsidised business to being recognised as one of the best venue management companies in New Zealand.

"This is a big but great change for me," said Glenys.

"I've always wanted to spend time in Central Otago and build something there. This opportunity to return to my roots and do something where I know can make a real difference for the region and for COWA members is about as good as it gets!"

She will take up her new role in February.

Jake Tipler's wine tourism business took him to every corner of Central Otago's wine industry, celebrating people and place, until Covid-19 desimated his client base.

Central Otago winegrowers have a new weapon in their campaign to stop the drift of dangerous agri chemicals – a map initiative.

Results from a survey of wine tourists in Central Otago are being described as “invaluable” by leading winegrowers in the region.