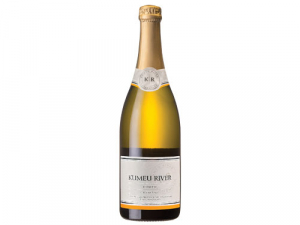 The name is French for sparkling wine made in the traditional method, the same way as Champagne, only Crémant comes from outside the Champagne region.

The new Kumeu River Crémant has been a work in progress for two and a half years while it was aged on tirage (its yeast lees, leftover in the bottle, following the second fermentation).

The concept has been in the mind of Master of Wine Michael Brajkovich for far longer.

“I think that New Zealand is underperforming in the sparkling wine category. There are a lot of really good ones around but it’s a really small part of the market and I think we can do it really well. You only have to look at the market overall and look to Australia to see how well Tasmania does in this regard. It has a climate just like ours, so there’s great potential here for us,” says Brajkovich, whose late father, Mate, formerly made a significant quantity of sparkling wine.

“I’ve always been keen on the idea of making sparkling wine and while Dad made a lot of it, this is the first one that Kumeu River Wines has made in the traditional method,” he says.

He chose the name Crémant to make reference to the fact the wine is made with a second fermentation in the bottle followed by tirage and disgorgement – the controlled ejection of the lees sediment while the wine itself remains in the bottle.

Crémant first gained prominence as a name in the late 1980s when the term Method Champenoise was made illegal by the EU. Wines made in the traditional method have since been referred to as Method Traditionelle but even this terminology is declining and, in France and the EU, the term Crémant has since largely replaced any reference to traditional method sparkling wine labelling.

In theory, Crémant can be produced anywhere in France but in practice it is most widely made in Alsace, Bourgogne (Burgundy), the Loire and Limoux; the latter being a cool climate, high altitude appellation in the Languedoc region in southern France. Crémant is also made in Luxembourg.

Unlike its European counterparts, the new Kumeu River Crémant is sealed with a crown seal because Kumeu River Wines is a cork-free zone.

The new Kumeu River Crémant is made mostly from Chardonnay, the key grape at this small family owned and operated wine specialist. It makes up 60% of this wine’s blend, with the balance, 40%, being entirely Pinot Noir. The wine has a dosage of 5 grams per litre of sucrose addition.

“This 5 grams of sugar was dissolved in 2006 vintage Kumeu Estate Chardonnay, and each bottle was dosed by hand, then topped using another bottle of the disgorged Crémant.

Most of the grapes that went into this first blend were from the 2012 vintage, with a little bit of old material from a previous vintage, which was used to blend.

Now Brajkovich has established a routine at the winery whereby a portion of reserve wine is retained each year. This still only constitutes a small component of each vintage’s Crémant, but it’s an important core ingredient for the sake of consistency in house style.

“The aim is to make a non vintage style but predominantly from one vintage by blending in a small amount of reserve wine, which will be made up of both grape varieties,” says Brajkovich. The wine will be made every year going forward and the volumes are growing from a small base, of which the first bottling was of 2,500, which is just over 200 dozen. As for the logistics of using the name Crémant, Brajkovich referred to the labelling regulations published by New Zealand Winegrowers, which appear online at nzwine.com “It all stems from the fact that Champagne is much more controlled in terms of its name. Crémant d’Alsace, Crémant d’Bourgogne and Crémant d’Loire are all terms for some of the French regions using the name Crémant, and that is allowed to be used by third countries, of which we are one, provided you conform to a number of regulations. One of these is that it has to be used in conjunction with a recognised designation or a geographical indication or GI, of which Kumeu is one.”

This also means that the wine has to be made from hand harvested grapes which are whole bunch pressed under certain yield restrictions, and the wine had to be bottle fermented to qualify for the label ‘Crémant’.

While the lees aging was for 30 months, Brajkovich says it was clear that the wine was continuously improving whilst on tirage.

“It was getting better and better, but there’s a limit to how long you can keep these things because they take up room and you really need to disgorge and sell the wine.”

Central Otago sparkling wine (and Pinot Noir) producer Rudi Bauer was also very helpful over the years as a sounding board on a number of issues relating to sparkling winemaking at Kumeu River Wines, says Brajkovich.

As for making a vintage wine, it would be “very difficult” and is not on the drawing board immediately. A Rosé sparkling wine, however, is on the cards, as is the possibility of a Blanc de Blancs, which would be made entirely from Chardonnay.

“The Rosé is easiest to do because all we have to do is blend some red Pinot into the white sparkling base, which will give it character and which we’ll probably do in the next few months.”

This wine would be three years down the track until release, however, says Brajkovich.

In terms of the overall production at Kumeu River Wines, the Kumeu Crémant makes up two thirds of a percent – less than one per cent - but this is destined to grow.

“We have made five vintages now and growth is in train. Only four have been bottled and the fifth is about to be bottled.”