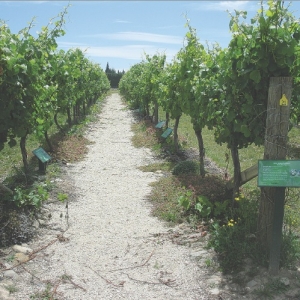 Go back several hundred years and you would have seen Waipara’s rolling hills and valley floor clad in totara, lacebark, kowhai, lancewood and broadleaf forest.

However, as in many of the country’s lowland regions, its landscapes have been transformed by farming and the cultivation of non indigenous plants – which include the vine - resulting in a significant loss in its biodiversity. It’s a situation that the groundbreaking Greening Waipara project has sought to address, with a success that’s not only benefited the wider environment but the vineyards themselves.

Greening Waipara sprang to life in 2006 out of initiatives by Lincoln University, local wine growers, the Hurunui District Council and Landcare Research united by a desire to enhance the biodiversity of the region.

It was initially part of a six-year government programme, Biodiversity, ecosystem services and sustainable agriculture; LINX 0303, which calculated the value of ecosystem (nature’s) services on arable, pastoral and horticultural land and enhanced it through ‘ecological engineering’.

Since then it’s given the region and its vineyards an ecological makeover. Initially teams from Lincoln University and then the growers themselves set about restoring native habitat in Waipara’s shelter belts, entranceways, stream and pond edges, vineyard borders and even the vine rows themselves through planting thousands of plants drawn from species that were once common.

“We stared with four vineyards and now we have 60 involved,” commented the project’s leader, Steve Wratten, Professor of Ecology at Lincoln University’s Bio-Protection Research Centre. “Of those 60, around 55 are winegrowers, with other members including a blackcurrant grower, local schools, the railway station and a sheep farmer.”

Vineyards have been at the heart of the programme, which was designed with their benefit in mind. Many of the plants selected by the scheme offer natural assistance in areas such as pollination, pest and disease control, weed suppression and soil quality. Amongst the vines, the project initially worked with buckwheat to attract the parasite wasp that helps control the leafroller precursor to botrytis and help suppress weeds.

“It was so successful that it’s brought pests down to below the economic spray threshold, which is in everyone’s interest,” says Wratten. “This has resulted in a drop in the use of pesticides in the vineyards.”

However, as buckwheat hails from Asia, the project harnessed the PhD research of Jean Tomkins to discover what native plants could perform a similar function. She arrived at a list of 15 species. The purple form of New Zealand bidibid was in pole position and has now been planted in the vineyards.

Eco-tourism is also an important element of Greening Waipara, through the establishment of biodiversity trails at Mud House, Pegasus Bay, Torlesse, and most recently, Waipara Springs. These allow visitors to experience Greening Waipara first hand as they wander down paths lined with natives supported by information about the individual species and their role in the ecosystem, as well as Maori uses. In order to engage the younger generation, a quiz was also devised that offers children the opportunity to win a biodiversity quiz book.

While the plants were drawn from the database established to catalogue local species, each winery’s input has resulted in four quite different trails. Mud House’s path leads into the vineyard; Pegasus Bay’s landscaped trail gives the impression of a botanical garden; the mature trail at Torlesse has a wilder feel, while the youngest at Waipara Springs is smaller and more gardenlike.

“This was just a weedy old hollow when we started,” explained Torlesse’s Kym Rayner as he walks through his trail that he has now opted to leave to nature’s own devices. “It’s been good. We now have a resident bellbird and having the trail is far better than just bare swale.”

At Pegasus Bay, Paul Donaldson has seen also more bellbirds, as well as wetas, ladybirds and even insect larvae in the lake, which he thinks may well be down to the trail. Flowing on from this, the winery has been planting wild flowers, with a notable recent success being the propagation of the near extinct native New Zealand orchid.

“Waipara is an area where there are a lot of vineyards that are on farmland, so people think you can’t have biodiversity, but this initiative shows that you can,” observed Donaldson. “It also illustrates how it can get things in balance and control things you don’t want.”

State funding for the project has now come to an end. The wineries are funding the upkeep of the trails, while the only financial injection from outside is coming from the Japanese Fourleaf company which purchases blackcurrants from the region. This has enabled the printing of the initiative’s newsletters and an imminent updated reprint of the Greening Waipara leaflet. However, the future of the project now lies in the hands of the region.

“Now 40,000 native plants have been put in,” commented Wratten. “Much of the Waipara community took the project seriously and it’s reached a stage where it has to decide whether or not it’s going to continue. I am sure it will.”  ν