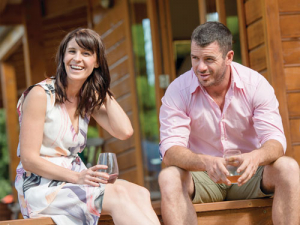 Alice Feiring, author of The Feiring Line blog, once said of Charles Chauvet, the credited father of the natural wine movement; “His ideology has somehow evolved into wines made with no sulphur at all. To get there, he did use organic grapes, advocated native yeast only and achieved his wine through cold carbonic macerations, all of which have become hallmarks of today’s extremely popular, insider, hip, esoteric and argumentative wine movement.”

The Tincan Wines range are natural, orange and pet’ nat but produced in bottles not cans as the name might suggest. I caught up with Nick recently to talk about these wine styles and their acceptance in the market place.

Are they, as Feiring suggested, only sold in the ‘extremely popular, insider, hip, esoteric and argumentative wine movement’ or are they garnering wider attention and acceptance with consumers as a valid wine style?

Nick says he totally understands the scepticism many people have about this style of wine. “If made well, natural wines can be intriguing and exciting. But poorly made examples are just bad wines. I guess like any winemaking, you need to do it properly.”

Having worked in the wine industry since about 2000 as a viticulturist and winemaker, he says he didn’t get into this because he saw the hype. “It is where I want to go. The reason I worked in the vineyards and as a winemaker for others, here and around the world, was because I was trying to build a business profile for myself so I could be the general manager of a small company.

“Along the way you learn all the ‘not what to dos’, and when it was time to have a crack at it myself, my experience of just how good well-made natural wines can be was key in choosing to go down this road.

“This venture is a culmination of all the little things I believe in about winemaking, rather than driven by the fact there is a hipster market in Melbourne. Laura sees the demographic as health conscious people looking for a healthier type of wine; not hipster guys with trucker caps and moustaches.”

In fact he says one of the hardest things is trying to portray that what they do is natural, additive free wine production but not bundled in with the hipster movement.

“We think of it as a lifestyle wine, we don’t like being a generalist and our production is tiny compared to many of the places I have worked.”

With production increasing from about 1000 bottles in 2016 to approximately 5000 bottles in 2017 this is definitely a boutique producer that is building funkiness into their wines using clean winemaking, “with no sulphur and avoiding things like VA and bret we are trying to build texture using skins, stems maceration times, the sediment as the antioxidant and so on. We are trying to build our wines more on the reductive end of the scale so when you taste them now they can be flinty, but when bottled and with a little age they will really start to show their pedigree.”

From the samples I have tasted Nick and Laura with their Tincan wines label are producers with an exciting future in this very valid sector of the wine production market.

Tom Dalziel, 27, from Thomas Bros in Riwaka has beaten off tough competition from four other entrants to be crowned Nelson's Young Fruit Grower for 2016 at Friday night's gala dinner.