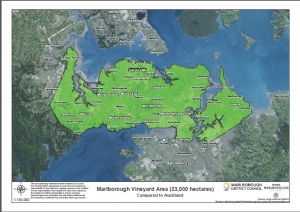 With close to 24,000 hectares of vineyards in Marlborough, the time is right to identify just what is planted, and where. That’s the view of Wine Marlborough’s GM Marcus Pickens and Cloudy Bay winemaker, Nick Lane.

Both are behind a project to produce a map of all the region’s vineyards, identifying each block by variety, size, age and clone.

“Twenty-four thousand hectares means Marlborough is now a significant vineyard region,” Lane says. “But we don’t have any real visual maps to show the world our story.”

There are generic maps produced by the Marlborough District Council (MDC) that show the region’s plantings, but there are no finer details that tell the story of what varietals are planted where.

“Having a varietal wine map is of communal benefit for the whole of Marlborough’s wine industry. This would be a way to highlight our diversity, given it will be a very powerful visual tool,” Lane says.

The initial idea of a varietal map, came after Pinot Noir 2013. Lane says the Marlborough members who took part in last year’s event, produced a large topographical map of the region, with each of the Pinot blocks of the Marlborough contingent highlighted. Visually, it was an impressive statement, which received a considerable amount of attention from visiting media. Now he says, it is time to take that idea a step further.

Marcus Pickens says in terms of telling the story of Marlborough, visual tools are vital.

“We have so many visitors to the region, who can see vines everywhere, but when it comes to identifying just where our Pinot plantings are, versus our Chardonnay and Pinot Gris, or even Sauvignon, we have nothing to show them.”

The inputting will be undertaken by wineries, rather than growers and all the digital mapping will be handled by District Council staff. Ownership of vineyards will not be highlighted, and the more detailed information of varietal and clonal information will remain under the control of Wine Marlborough. Lane says this is not a statistical study or a land use survey of the region.

“It is not a device for any body or organisation to analyse or derive conclusions from. And it is not a map designed to show ownership of any producer or grower and it will not be traceable.”

Besides providing a significant marketing tool, the map would also have other benefits. In time the vineyard details could overlay water, soil and climatic maps, as well as topography. It could also provide the ability to detail the age of the region’s vines, which is a useful tool when marketing certain varieties such as Pinot Noir.

It is hoped the map will be close to 100 percent complete within the next 12 months and be available to highlight the region in time for the 2016 Sauvignon Blanc celebrations, to be held in Marlborough.

Trying to explain how vast the plantings are in Marlborough has always been a difficult task, Pickens said.

“People we host, both local and international literally can’t fathom just how much of Marlborough is dedicated to the wine industry,” he said. “Whenever I mention that we have over 23,000 hectares, the reaction is a blank look. I honestly believe I could say we have 2,300 hectares and I would get the same blank look. I thought it would be interesting to see if we could overlay those 23,500 hectares on a map of say Wellington and Auckland.”

He asked Malcolm Jacobsen, the MDC staff member involved in the digital mapping, if that was possible. The end result was so astounding, that neither Jacobsen nor Pickens could believe the result. The findings were consequently double-checked and triple checked. Jacobsen’s initial results proved to be correct.

Those findings are impressive.

Postcard: Winemaker Nick Lane writes from his new base in the UK

It's now been five months since I moved from Champagne to Kent.