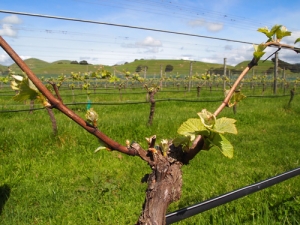 Spring growth such as this can be decimated by strong winds and frost, making life tough for Wairarapa growers.

There are many small wine regions in this country; from Waiheke Island with its transport issues, to Nelson with its west coast autumn weather pattern, to the Wairarapa and North Canterbury, both of which can experience the double whammy difficulties of frost and wind in spring.

This story is about the Wairarapa. The region begins in Featherston; the town that lies at the foot of the winding, windswept Rimutaka Ranges.

There are two directions that weather can take in this region; windy and windiest. Which one depends on the day, the aspect of the vineyard, the elevation on which its grapes are planted (mostly flat in the entire region) and its proximity to the coast. The town of Martinborough is the best known wine growing area in the Wairarapa but approximately 50% of the grapes and wines grown and produced come from the northern Wairarapa areas of Gladstone, Masterton and surrounding vineyards. The changes in climate and weather may seem slight in the northern Wairarapa when compared to Martinborough, but they can result in significantly different harvest dates and subtle but noticeable variations in the styles of wine.

It is the greatest friend and worst enemy of winemakers in the Wairarapa. As in the capital, wind in the Wairarapa is spread throughout the year but is fiercest in spring when its intensity can decimate entire crops.

Gewurztraminer is a case in point. This grape can be so sensitive at bud burst that it cannot always withstand the intensity of the Wairarapa's spring winds. The result is that Gewurztraminer has zero fruit set in some years, in this region. This is a shame because this high sugar grape variety has the potential to make commandingly powerful wines in the Wairarapa, which has one of this country's most pronounced diurnal variations – that difference between day and night time temperatures. For this reason, the retention of acidity is extremely high for grapes grown in this region. Add to that the pronounced tannins in the skins of the small tough grapes that do survive the ferocious spring winds and you have a powerful structural combo'.

The problem is profitability.

The wind that reduces bunch weights and grape berry size, also wipes out profitability. This is Mother Nature's way of wreaking both joy (in the flavour of the grapes) and havoc (in the lack of profitability) in one fell swoop. It is also the reason that the structural support provided by tannins can be more pronounced in Pinot Noir from the Wairarapa than in many other New Zealand wine regions. And it's all because of the wind.

Annual rainfall is significant in the Northern Wairarapa, which receives between 700 to 800mls, most of it falling between June and September. Fortunately, the ripening months experience low to no rainfall.

The coolest day in the region is approximately 6 to 7 degrees Celcius while the warmest summer days are generally between 30 and 35 Celcius. The temperature can climb to 40 degrees Celcius and over, but these are the exception rather than the rule.

"For me, what's really exciting is that while Martinborough gets up to 32 degrees during the day, and drops down to 10 degrees at night, we in the northern Wairarapa are also high during the day but we are even cooler at night; usually down into single figures. We generally get budburst five to seven days later than Martinborough, and harvest is usually two weeks later, due to the higher diurnal range," says Angus Thomson from Urlar Estate.

"The longer those grapes can hang on the vines and mature with the sugar rising and acid falling, for me that is a good thing. I think that those factors have the potential going forward to provide some exciting flavours in the grapes."

The hot dry weather has seen total fire bans imposed on many parts of the South Island and Wairarapa will soon have one, says Federated Farmers national vice president Anders Crofoot.