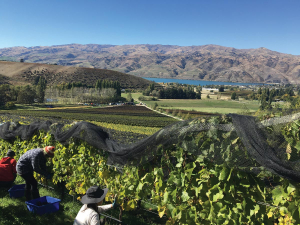 They have well surpassed an earlier nationwide challenge to achieve 20 percent organic wine production by the year 2020.

Organic certification (either through the BioGrow or Demeta certification systems) is held for 320 hectares or 17 percent of Central Otago’s wine production area, whilst a further 115 hectares or six percent of the planted area is currently undergoing conversion to organics.  (Land must be managed to a certified organic standard for three years before full organic status is granted by an organic certifying body.)

Paulin said the collaborative nature of the Central Otago industry has helped spread the word and gain a critical mass of organic growers, amongst them many of the biggest and best known brands from the region.

Dry autumns and relatively low humidity are regional advantages that can reduce the need for chemical sprays. Paulin said the biggest challenge to organic growing in Central Otago is weed control.

“Central Otago is a natural fit for organic viticulture. We are passionate here about taking great care of our land, and also driven to create the absolute highest-quality wines,” Paulin said. “Time and again, organic and biodynamic production has been shown to create premium wines that truly express the spirit of our land, while regenerating and preserving the landscape for future generations.”

Paulin said organic certification was a credibility to stand behind your product. “It’s an additional cost to production, but its not that much in the grand scheme of things.

“A lot of people are doing it because they think it’s the right way to farm – not to put it on their label.”

He said growers were becoming more focussed on producing wines in a more natural way, in what he describes as “conscious cooperation with nature.”

He said the inclusion of Gibbston Valley Wines’ Schoolhouse Block at Bendigo in the Organic Focus Vineyard Project, initiated by Organic Winegrowers NZ, had boosted local awareness of the methods, advantages and challenges of organic growing in the region, and regular field days had been popular.

Gibbston Valley’s winemaker Christopher Keys said the focus vineyard project run from 2011 to 2014 had given the company confidence and now the remaining half of the Schoolhouse block (which
had been managed under standard wine industry agrichemical practices during the focus project) and a total of half of the company’s vineyards have been converted to organics, with potentially more in the pipeline

“The focus vineyard showed that the whole thing works here, restoring soil and vine health -  it’s a logical progression here. Our practices improved, and it made conversion of the other vineyards smooth.

“It’s a really good outcome for Central Otago and the growers here, it works down here and hopefully it’s the launchpad for where we will be in five to 10 years’ time,” he said.

Vinewise Viticulture, based in Cromwell began specialising in organic and biodynamic vineyard management across Central Otago 10 years ago. They now manage around 100 hectares or half of their client’s vine area organically. Co-owner and viticulturist Grant Rolston said the biggest challenge was the vines’ struggle for nutrients in the second year of conversion when they went from a “junk food diet” but the availability of new organic products on the market in recent years made this much easier to manage.

Nearly one-third of the grapes going through Vinpro winery – which processes around 10 percent of the region’s production, is now being grown using organic management practices (either certified or in transition), said winemaker Pete Bartle.  “The wines look good, and the fruit looks good in the vineyard,” he said.

Maude winemaker Dan Dineen said it made sense to have their contract winery certified, with an increasing share of the around 700 tonnes of fruit processed this year coming from clients tending towards organic management.

“There’s been positive collaboration between the national organisation and COWA over the years to promote organics.”

She said that with 17 percent of Central Otago’s vineyard area being certified organic, this was more than three times the national average (of 4.5 percent of vineyard land certified).