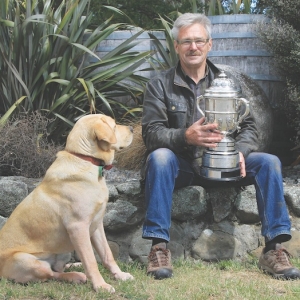 Clive’s Labrador is suitably impressed with the trophy.

The latest one is the Loder Cup for 2014, which he was awarded by Conservation Minister Maggie Barry in Wellington, in October last year. The award to Paton was in recognition for his work in supporting the Project Crimson charitable trust (which protects and reforests pohutukawa and endangered Northern rata) and for his intensive other involvement in environmental work.

Paton grows rata from seed and, over the past decade, he has planted not only his own rata seedlings but over 50,000 other trees at the Ata Rangi Bush Block; a 130 hectare, partly Department of Conservation-covenanted area of land, which is adjacent to the Aorangi Forest Park in the South Wairarapa.

He also founded and is chairman of the Aorangi Restoration Trust, which works to restore biodiversity in the Aorangi Forest Park. And he is on the board of the Pukaha Mount Bruce National Wildlife Centre in the northern Wairarapa.

Paton was nominated for the Loder Cup 2014 by the Wellington Conservation Board but says that he was unaware of it, until about a month prior to the award presentation when he received a phone call from the Department of Conservation.

"That call was to ask if I was available on the day of presentation in October 2014, so they sort of let the cat out of the bag, so to speak," he says.

The Wellington Conservation Board's nomination for Paton described him as "a leader with incredible vision for what can be achieved in our environment.

"He is motivated by a philosophy of looking after the environment today so it can be enjoyed and cherished by his grandchildren and others in the community."

Paton's environmental work was also recognised when he received an Officer of the New Zealand Order of Merit in 2012. But neither that win nor the Loder Cup suggest to him that he can rest on his conservation laurels, he says.

While Paton says he doesn't need the win to affirm his own commitment to the environment, he is pleased to receive the recognition because it enables him to share the importance of conservation work with those who volunteer to work with him.

"This win is great for the people around me from Dad's Army; the group of Lion's in Martinborough, who help hugely with the environmental work in this region. It also recognises those who look after the penguin boxes on the south Wairarapa coast. It says to them that we are on the right track, if the conservation movement recognizes the work that we are doing. My win feeds back to the other people around me," he says.

"There is a whole list of people who help and I do have to take stock occasionally and thank god that there are a lot of people out there who care about and are keen to help with the environmental work we do."

Among those who assist him in his environmental work are a group who catch rabbits, which Paton is then able to feed onto the traps.

"This work is great. It saves me the time and is a natural way of making the environmental work self sustaining.

The most time consuming part of his environmental work is in finding the funding for it.

"A huge amount of our time in environmental work is spent in finding the money to fund what we are trying to do.

"It takes longer than doing the work itself, but that's the case for most people who are working for community organisations, so we have to just go with that," Paton says.

The Loder Cup is named after the late English botanist, Gerald Loder, who was a strong advocate of New Zealand's indigenous flora and donated the cup in 1926 to "encourage and honour New Zealanders who work to investigate, promote, retain and cherish our indigenous flora."

Anne Lawrence, chair of the Wellington Conservation Board, describes Paton as a person who is a mix of vision and action.

"One minute he'll be outlining a big, bold idea for how things can be in 30 years' time, and the next he'll be setting possum traps or penguin nesting boxes down on the coast," she says.

While Paton is grateful for the recognition of the Loder Cup award, and for the support of the key people around him, he says that he hopes its biggest spin off will be to encourage others to get involved in their own community's local conservation programmes.

"Making real progress in conservation demands as much, if not more, tomorrow than it did today, so best I get on with it."

Forty years of wine and conservation at Ata Rangi

Balancing a life of wine with a passion for conservation comes naturally to Ata Rangi’s Clive Paton, who spends mornings at his Martinborough winery and afternoons in his native forest.