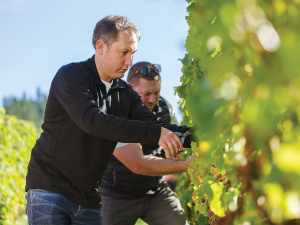 In the first Sommeliers Choice Awards held in the US, a Marlborough winery gained medals for every single wine they entered in the competition.

Of 12 awarded medals, the te Pa range picked up two golds, nine silvers and one bronze, across the full range of their portfolio. They were also awarded the New Zealand wine of the year for their 2018 te Pa Sauvignon Blanc.

For the company which has only been in the US market for three years, the acknowledgment is hard to place a price on.

“The main reason we entered the competition, was because the wines are judged by sommeliers,” says winemaker Sam Bennett. “Getting our wines in front of the right people, the ones that go back to the restaurants having seen the wines means they may think about adding them to their lists. The somms are the interface to the consumer on a day to day basis which is really important.”

While it can often be difficult to gauge the effect of winning a medal at a wine competition, Bennett says within two weeks of another top announcement from Decanter in June, the entire production of one of their wines - the 2017 barrel fermented te Pa Sauvignon Blanc Oke - was snapped up by one US distributor.

Interest in the other medal winning varieties has been on-going he says.

The Sommelier’s Choice Awards had a judging panel of 21 top sommeliers, on-premise wine buyers and wine directors at US restaurants, hotels and resorts, bars and clubs.  All the wines were judged according to criteria such as how well they paired with food items, in addition to their overall versatility.

Bennett says it was a surprise to see the entire range taking out medals.

“To be that consistent is nice, because being stylistically consistence is as important as perceived quality in the wine competition environment.”

te Pa is a family owned wine company with two main estate vineyards – 200 hectares in the Wairau Bar area and another 100ha in the Awatere Valley, with several smaller parcels around the Marlborough region. Plans are to develop a further 70 – 100 ha later this year.

Having only started in 2011, the company is now exporting to eight international markets, under three different labels; te Pa, Koha and Pa Road. In late 2018, te Pa released its Reserve Collection range of single vineyard, hand-picked wines, and this year they will also release a single vineyard Sauvignon from the Wairau Bar, under the Seaside label, adding to the Collection’s Hillside Sauvignon from the Awatere.

“These will be very different stylistically and will show the different characteristics of each vineyard,” Bennett says.

te Pa was not the only New Zealand winery to be recognised in the awards, although it was by far the most awarded. Whitehaven’s 2018 Sauvignon Blanc was awarded a gold medal, with Pencarrow, Decibel, Tiki Estate and Duck Hunter, being awarded silver medals.