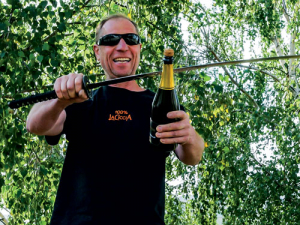 Though, having no set agenda except knowing that I hadn’t written anything about Quartz Reef, I figured let’s just wing it.

Interestingly, after only a few minutes I knew what the angle would be. We could have chatted about Pinot Noir, Pinot Gris, Gruner Veltliner or even the Noble Riesling, but with recent news that both Decanter and Wine Spectator have dished out praise for the Quartz Reef Brut (90 points respectively), then it didn’t take much for Rudi to start waxing lyrical about sparkling wine, especially as it is now edging out their Pinot Noir in terms of total production.

“You know, some people are still kind of surprised that we make sparkling wine as well as the other varieties. I guess that comes from an overwhelming focus on Pinot here in Central” says Bauer. “Central Otago is actually really well suited for sparkling wine. In 1990 when we saw the site in Bendigo, there were only six vineyards in Central Otago and Bannockburn hadn’t even started planting. We originally got into sparkling wine because at that stage we had no idea what Pinot from this region would become. The idea with Pinot was that it gave us the ability to switch to sparkling wine. It was a logical conclusion for our business plan, but what eventually happened was that the Pinot proved very successful, so as well as the sparkling we went from 15 hectares to 30 hectares”.

Fifty-three years since the first sparkling wine was made in New Zealand at the Mission Estate (Fontanella), New Zealand sparkling wines are now seen as a great value for money alternative to Champagne. But with Marlborough providing the lion’s share of production and promoting itself as one of the world’s best sparkling wine-growing regions outside of Champagne itself, Bauer is quick to point out some of the hurdles that he has had to overcome getting recognised for his sparkling wine.

“In Champagne there are 3000 producers with 25,000 hectares, so now you translate that to New Zealand and it inevitably comes back to Le Brun or Lindauer, because people still believe that if there are a couple of bubbles in there it does the trick. But to educate the palate, that takes a lot more work than educating the palate of people drinking Riesling or Pinot or Syrah for that matter”.

Thanks to the pioneering efforts of Daniel Le Brun and his conviction to make a Marlborough Méthode Traditionelle to rival the best in the world, it wasn’t long before certain Champagne houses got in on the act. Though when Deutz used traditional Champagne techniques to release their first Marlborough Cuvée in 1990, Central Otago wasn’t that far behind.

Though, even with another produced in 1994 and the collaboration between Chard Farm and Amisfield, sparkling wine in Central Otago was more a novelty than a burgeoning enterprise. So when Quartz Reef came to their first vintage in 1998 there wasn’t any infrastructure locally that they could call on.

It took a leap of faith and a substantial capital investment that is now paying dividends in more ways than one.

“Our main point of difference and something that we haven’t been good at promoting, is the fact that we handle the production of our sparkling wine from start to finish. Single estate, estate bottled and estate disgorging and then it hits the market…a full circle that is very traditional. We had to actually design it this way because when we started there was no-one else around.”

Stoicism and determination are two words that inevitably crop up in any discussion about the efforts of the early Central Otago wine community, and while it might be easy to gloss over this in light of the industry strength here now, 20 years on and Bauer is still battling a bias against his sparkling wine.

Having been trained in Europe with tutelage from Jacques Peters at Verve Clicquot, not to mention the association with Clotilde Chauvet and her family, Bauer recognises the advantage that gives him when making sparkling wine, but by his own admission, Quartz Reef have never tried to milk the Champagne connection. Rather, he is keen to stress the unique strength of the region and the viticulture on the wine that he produces.

“Because this is Central Otago, we have a completely different acid profile and different focus and without doing anything you are already separating yourself. On top of that, our wine is all single vineyard, which is a little unique as its normal for Champagne to be made from grapes from different vineyards, and then we are biodynamic too. This commitment to the vineyard means that we are able to express some distinctive characters in the wine. In fact, the sparkling is a far truer definition of the land than the Pinot is because you have no influence of oak, no influence of tannins or phenols for that matter, and you have no influence of malolactic. It’s like a straight forward Dry Riesling, if that comparison makes sense. In actual fact, what I learn from making sparkling wine I transfer across to the Pinot.”

With the name ‘Champagne’ synonymous with celebration, gracing the podiums of Formula 1 and any number of sports award ceremonies, Bauer thinks that association can be both a curse and a blessing.

“Of course, the name Champagne is an extraordinarily powerful tool and it is very hard to break through the perception that if you celebrate, you have to celebrate with Champagne. That bottle on the table in actual fact is only a tool for celebrating something, provided that it is something to show off your wealth or taste, and Champagne ticks that because it doesn’t matter what it tastes like, right?”

Supporting local sparkling wines doesn’t just have to be about exercising some form of parochial pride either, it’s actually a pretty savvy purchasing decision in light of the price point and quality. Through, in a region obsessed by Pinot Noir, Bauer has a particularly interesting way of breaking down the distinction between the two wines.

“Sparkling wine needs to mark a celebration and it needs to be shared, whereas Pinot Noir demands to be the centre of attention. With sparkling you grab it and bingo, you drink it. You are less likely to do that with Pinot. Sparkling wine is there to make everything more beautiful.”