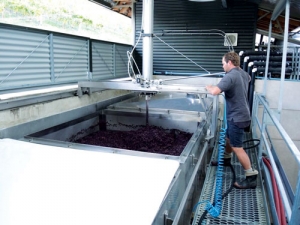 For multi-instrumentalist composer Kent Macpherson, setting up microphones in a winery is riveting stuff. Taking leave from his role as an audio technology lecturer at the Waikato Institute of Technology (WINTEC), Macpherson visited Felton Road as a field recordist focused on testing methodologies concerning ‘hidden soundscapes’.

“I’ve known Blair Walter (winemaker at Felton Road) for 30 years, and we discussed a way that we could combine our professional practice. Blair said that wine fermenting is a very active environment and this got me thinking about what kind of detail I could capture through the right placement of microphones.”

Macpherson realises that the practice of recording sound in a winery isn’t unique, especially in light of the work done by Jo Burzynska on her multi-sensory Oenosthesia installation.

“Well, my angle is a little different. The aim is to keep the project true to the conventions of field recording with little or no manipulation of the captured sound, apart from some EQ and noise reduction. I am looking for hidden aural worlds to amplify the minute details within them.

“We can never ‘turn off’ our ears, so in some ways we train them to become static observers. As a sound artist, I try to reverse this behaviour by capturing common sonic artifacts and reimagining them in a new context.”

Rather than just set up some stands with directional shotgun-style microphones aimed at the fermenting vats, Macpherson used microphones encased in plastic to get as close to the nuance of the sound as is physically possible.

“They are called ‘Dolphin Ear Pro’ hydrophones and can be totally submersed. With the Pinot Noir, we forced them below the skins in to the juice and also allowed them to sit amongst the skins for some variation. I also used JRF contact microphones to record fermentation locks and the resonances of the oak barrels containing Chardonnay. The microphones only really work when attached to a ‘surface’. These recordings are quite hypnotic”.

Just as a music review can never do justice to actually experiencing an album, reading about the sound of wine fermenting doesn’t even get close.

“Yeah, the Pinot Noir was what I can only describe as violent!,” says Macpherson. “Huge, globular bubbles bursting and exploding. Skins squealing and popping…giving off dolphin like calls.

“The real surprise for me was the fascinating rhythms of the fermentation locks on the Chardonnay barrels. Some gave off quick modulating sine wave like pulses, whilst others gave off aggressive percussive metronomic beats. The robotic rhythms immediately inspired me to incorporate the entire project in to a more ‘musical’ and structured composition”.

As phase one of a two-year research project, Macpherson doesn’t intend for the recordings to be buried on hard drives. The objective is to edit and refine the sounds so that they can be fully appreciated as part of an ‘Acousmatic’ installation. Slated for April-May 2016 (venue TBC), listeners will be exposed to an array of six to eight speakers emitting the aural experience of fermentation . “The idea is that attendees will taste the 2015 Felton Road vintage wines before they are commercially released, whilst immersing themselves in the sonic properties of the very wine they are drinking.”