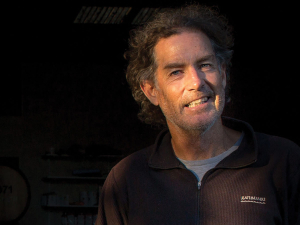 “However, the quality of the fruit we did harvest was excellent and the signs are that the ‘21 vintage is going to produce some outstanding wines. Just smaller than wished for volumes.”

Andrew, who has 30 vintages under his belt, says milder winter night-time temperatures in 2020 led to a slightly earlier bud burst for the organic vineyard, running six to eight days ahead of a typical year. Weather patterns throughout spring and into the first week of December were cool and unsettled, with regular rainfall events and frosts in some parts of the region, he adds. “While canopy growth on our vineyard was healthy, conditions were not ideal for flowering, which was protracted and compromised, resulting in small berries, ‘hen and chicken’ in Chardonnay, Pinot Noir and, unusually, even in Sauvignon Blanc.” That resulted in light bunches and ultimately lower yields.

The Greenhough experience is reflected across the whole Nelson region for the 2021 vintage, with reports of excellent quality fruit from small volumes. The region is expecting the total harvest to be 30 to 35 percent down, with some varieties affected more than others.

The second week of December saw Nelson temperatures increase as expected, but a severe hailstorm on Boxing Day resulted in leaf and berry damage, further reducing yields in some varieties. However, this was a localised event that did not affect all vineyards across the region. January brought warmer weather, some rainfall mid-month and a cool period for two to three days around the 20th.

That was followed by drying winds and warm conditions that continued throughout February, “without extremes but becoming dry enough on the free-draining Waimea Plains that water restrictions were about to be imposed”, says Andrew. The dry conditions were relieved by 12mm of rain on 9 February and then another 72mm on the home vineyard from 25 February, accompanied by cooler day and night-time temperatures. “The loose bunches were in healthy condition so there was no adverse effect from this rainfall. In fact, it resulted in a positive, freshening rehydration.”

Harvest for Greenhough Vineyards began on 9 March and was completed with Riesling on 23 March. “Due to the lower volumes, harvest was a relatively compressed and relaxed event which meant that we weren’t exposed to the rains which arrived in April,” Andrew says.

Andrew says it was a “great growing season”, without the extremes of 2018/19 or 2019/20, when there were drought conditions, a number of heat spikes and warmer night-time temperatures.

The “more moderate, balanced season” makes for wines with freshness and well-defined fruit characters, he says. “Sugars aren’t super high, but they haven’t been for a few years now and we’re finding our wines are better for having lower alcohol levels… Slightly lower pH this year will also give us bright, vibrant wines with nice purity.”