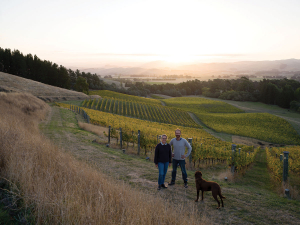 “Because you could see the potential for quite a fruitful harvest was there.” Unlike those slopes, which escaped damage from mid-Spring frosts, the lower terraces of the estate yielded far less than anticipated, meaning volumes of the company’s estate wines will be limited. “We expected yields to be down about 50 percent across both of our vineyards and throughout North Canterbury,” he says. “Some spots were far better and some far more in reality, but overall, 50 percent down seemed to be about we finished up.”

Getting some of the best hillside crops ever, “if not the best”, means Greystone will have good stocks of higher tier wines, and he anticipates heavy demand, thanks to “amazing” quality. “It was the third vintage in a row where we have had superb harvest weather, and the weather preceding harvest as well.” Dry conditions meant the fruit had purity and good flavours, and gave the crew the ability to pick when it was optimum, he says. “That has flowed right through from the tank to barrel and we are really thrilled with the quality involved... It’s a really strong vintage, which is important for a small vintage.”

Now there will be a “juggling exercise” to make sure loyal customers and distributors have what they need to get through, and he expects less exploration of new markets. Greystone Wines General Manager of Sales and Marketing Nik Mavromatis has spent the past two months working with distributors to discuss the best way forward, says Dom, noting that having multiple varieties and staggered releases means they won’t have to absorb the hit in a single year. Initially there will be pressure on some whites, in 2022 the barrel fermented Sauvignon and Chardonnay will be light on supply, and by 2023 Pinot Noir will follow suit.

Over at Black Estate, co-owner and winemaker Nicolas Brown says the frost in mid-September and early October damaged early bud growth, followed by poor weather at the start of flowering in mid-November, reducing bunch and berry size. Dry, windy conditions in late February exacerbated the situation, causing shrivelled berries, he says. However, low yields with small clusters allowed harvest to move quickly across the three hillside vineyards, “which was useful as brix increased rapidly in some blocks”. He says they were grateful to have attracted a strong team to assist with hand picking, which started a week earlier than predicted, on 8 March, and was all over by early April. “Since harvest we have seen unusually dry conditions persist, which would mean perfect ripening for any producers with later ripening or late harvest varieties so I would expect some exciting wines made throughout the valley.”

Co-owner Penelope Naish says the next challenge is in meeting demand. “We are going to have to be very careful with how we allocate our wines, but we are a small winery so it’s possible for us.” Many of their wines are sold direct to consumer within New Zealand, but they will be a little more careful with their export markets, and “managing that to make sure everyone gets a little bit,” she says. “It is what it is and as long as we are making quality wine and getting the right margin for it, our business model can work - but perhaps we don’t need to do so much marketing.”