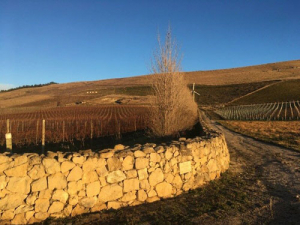 Is Waitaki Valley the most challenging or the most promising New Zealand wine region and who is making money from this area? Joelle Thomson investigates.

When it comes to challenges, the winemakers of Waitaki Valley know a thing or two.

The valley is one of the southernmost wine regions in the world at 45° latitude and its winemakers are the last in New Zealand to harvest their grapes each year, typically picking two to three weeks later than Gibbston Valley, which is the last of Central Otago’s wine areas to harvest – and is even further south.

Waitaki is on the border of North Otago and South Canterbury.

It has one of the longest, slowest ripening periods in the country with extremely low yields, by anyone’s measure. It is not uncommon to harvest a bunch of Pinot Noir that weighs 50 grams compared with a bunch from Central Otago that weighs 120 grams, says winemaker Grant Taylor, who has learnt to modify his pruning and trellising methods to get bunch weights up.

This makes it expensive to grow grapes and produce wine from Waitaki but the up sides are ripe flavours with high acidity, which gives energy to the wines - and alcohol levels that can be lower than in Central, says Taylor.

Waitaki is home to another prized commodity in Pinot Noir vineyards too. Limestone. It has so much that the region’s limestone laden hillsides could be more at home in the north of France than in a remote region in New Zealand’s South Island. But there you have it – a fledgling wine region inland from Oamaru.
One of the earliest vineyards was planted by Jim Jerram and his wife, Anne, whose brother, Jeff Sinnott, makes the wines for their Ostler brand. In the middle of 2017, the Jerrams flew me in their neighbour’s small plane to visit the valley and get a bird’s eye view of its plentiful limestone, followed by a tasting of their wines.

The trip provided in-depth background and a strong sense of place to bring to a tasting I hosted in Wellington at Regional Wines & Spirits. Jerram flew up to attend and wine producers all supplied their wines free of charge for the tasting, which resulted in sales and increased interest and understanding of this beautiful, rugged and remote region.

We tasted four Rieslings and seven Pinot Noirs from six of the 13 producers in the Waitaki Valley - Earth Keepers, John Forrest, Ostler, Pasquale, Q and Valli. This was followed by a line up of Chardonnays, Gewurztraminers and white blends, which time did not allow us to examine in as much detail as the wines in the main tasting.

Conclusions of the tasting

The Rieslings from Waitaki were commanding in their precision, thanks to their fresh high acidity which was balanced by intense citrus and green fruit flavours, which lingered in each of the wines. The top three Rieslings from my tasting notes were:

2013 Ostler ‘Lakeside Vines’ Waitaki Valley Riesling – youthful from its pale colour to its high acid and freshness; this wine has graet aging potential, is off dry in taste but finishes on a steely crisp note with an almost-dry ending and great concentration. It contains 10 grams per litre of residual sugar and 12.5% ABV.

2016 Valli Waitaki North Otago Riesling – another youthful wine with super fresh acidity and great succulence, juiciness and a long finish; a keeper with 18 grams per litre of residual sugar and 13% ABV.

2015 Valli Waitaki North Otago Late Harvest Riesling – luscious with 123 grams per litre of residual sugar but great balance, thanks to its high acidity, richly honeyed flavours and textures and its low alcohol of 9% ABV. A stunner. Another keeper.

2010 Ostler ‘Caroline’s’ Waitaki Valley Pinot Noir – moving into earthy tertiary flavours with great complexity and easy to taste why this is regarded as the best Ostler Pinot Noir yet made by winemaker Jeff Sinnott.

2016 Q Waitaki Valley Pinot Noir – floral aromas and dark fruit flavours drive the core taste of this soft, approachable young Pinot Noir, which is light in body with a long finish and drinks well now, but has aging potential of 4-5 years.

2015 Valli ‘Waitaki Vineyard’ North Otago Pinot Noir – big, complex and firm, this wine has characters of whole bunch stalk and stem notes, which contribute both structure and savouriness to this wine, which has a long finish thanks to its high acidity.

The top Pinot of the tasting.

2012 John Forrest ‘Collection’ Waitaki Valley North Otago Pinot Noir – rich red fruity flavours add a real approachability to this wine, which is full bodied with pronounced oak influence adding weight but also intense flavours, which some tasters found too dominant . This is an impressive wine, which drinks well now and can age for 8-9 years.