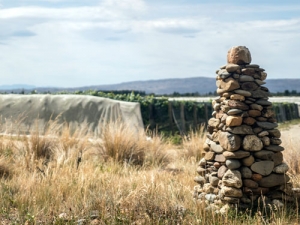 The big dry continued for Central Otago this growing season, with some saying it is the driest period in 39 years.

Gisborne Winegrowers' Society president Al Knight says the season is going well for local growers and the weather has generally been behaving itself.

"There have been a couple of humid spells but they have had little impact on grape crops and there's been nothing significant as far as botrytis is concerned," says Knight.

Feedback from growers has been largely positive and the control of powdery mildew is being managed well in the district, he says.

"As for the possible yield, the crops look to be average to above-average in most varieties.

"Any variability in yield is mainly due to the 'hen and chicken effect' which occurs when the vines encounter a cooler period over flowering."

Knight says the season is tracking a little later than last year, up to 10-12 days behind in some varieties, depending on the location.

"Some of the first grapes in the district were harvested on February 26th, the bulk in mid-March, finishing off around the second week of April with Merlot, Syrah and Malbec."

Indevin production winemaker Steve Voysey says; "This is shaping up to be another stunning season for Gisborne wine."

Leading into their extended harvest, Hawke's Bay's wine growers were feeling cautiously optimistic about the possibility of pulling off yet another corker vintage.

The growing season got off to a slow start, however. After a cool wet spring, vineyards across the sub regions were lagging behind some 7-14 days by the end of the year.

Summer finally arrived, however, and February's searing temperatures included a near fortnight's run of 30-plus degree days. That was what was needed to bring the grapes on, and most growers had caught up by the time harvesting got underway in the first weeks of March.

Sileni Estates' chief winemaker Grant Edmonds says the only real concern was that, as in 1998, winery staff would have to scramble if a number of different varieties were ready to pick at the same time.

"Acids are down because of the heat, so we have an interesting balance," he said of the fruit in early March. "We're not having to push brix high while waiting for acids to drop. We are expecting 12.5 percent alcohol but ripe reds. That's a very unusual balance for us."

"We're dropping a lot on the ground -- a third to a half. We make expensive wines and want to make good wines. So the bunches are looking perfect. I've not seen Chardonnay look quite as good."

Selaks was off to an earlier start than most, harvesting Pinot Gris in the first week of March and then Sauvignon Blanc the following week for the company's low alcohol Breeze range.

Head winemaker Brett Fullerton, who is Hawke's Bay based, expected vintage to be over by May 1. It was a slightly later season for the company, he said, with growing degree days tracking a little behind average.

However February had been very hot with exceptionally warm nights and he expected that to result in nice flavoursome wines.

Size is never an issue for Wairarapa winemakers, who routinely anticipate that the wind will do its worst - decimate crops before fruit has had a chance to set.

But not this year.

The 2016 season has been radically different for many in the Wairarapa, thanks to settled spring weather, significantly less wind than usual and extremely warm February temperatures.

"We have had nice fruit set and nicely formed bunches, which is a real plus for us here," says Helen Masters, winemaker at Ata Rangi in Martinborough.

"We often get a lot of shatter with lose bunch architecture but with less wind, we have slightly tighter clusters than normal. This also means that bunch weights will be significantly heavier than usual. We have been able to prune, taking shoulders off and still have a nice level of crop."

The region did experience frost in spring, however, which meant some reduced crops.

Masters says that the spring frosts tended to do more damage in the Te Muna area; nine kilometres west of Martinborough township.

"The season until the beginning of February was tracking slightly lower than average in growing degree days, but February has been hot, so while we were about a week behind, we are now back on schedule."

Much of the Marlborough region has been on a diet this season – with thinning being the name of the game. With predictions that yields were 20 percent above average, machine and hand thinning has become the mantra for many growers.

However not everyone was in the position of having higher yields. Spring frosts impacted on certain areas, and Dr Mike Trought from Plant & Food says flowering was variable due to weather conditions in December.

While late November and early December provided ideal conditions, the temperatures dropped shortly after, impacting on those varieties and sub regions that were later to flower.

"However more people are saying they (crops) are bigger than average, than those saying their yields are down," Trought said.

Cloudy Bay's assistant viticulturist Matt Duggan says there were areas within the region that experienced spring frosts for the first time ever, and while there wasn't widespread damage, for those growers affected it has been a tough growing season.

He agreed with Trought that the yields are variable, depending just where in the province you are based.

"Some sub regions have heavier crops than others, and while some people have had to thin substantially, there are others that have only had to go over the crops lightly."

Solid bouts of rain in January and February have not only helped refresh canopies at a vital time, they have also helped raise river levels, preventing irrigation shut downs. However those spells of rain have also heightened the botrytis alert, which Duggan says is being carefully monitored.

"We don't want too much more rain between now and the end of vintage," he said.

Despite the warm temperatures during February and early March, Duggan says they are actually behind on the past two years.

"Picking this year began on March 9, so we are a good few days behind. But that's more to do with the larger crop loads this year, not the growing degree days or heat summations.

"I know it's still early days, but it's looking very strong. We are coming off the back of two very, very good years and we are aiming to repeat that in 2016."

With record low spring rainfall and nothing in the medium range forecasts, rural water restrictions were introduced in Nelson earlier than ever before, but that all changed in late November with some rain and further rain events occurring regularly through December and January.

Chairman of Nelson WineGrowers Jonny Hiscox said; "growers in the region appear to be coming through the region-wide challenges all right. We have just had the hottest summer since records began in 1940 and had flooding that left some vineyards looking like swimming pools in late February. Having said that, people have worked exceptionally hard with viticulture to manage any issues and most appear to be coming through the challenges well."

Brightwater Vineyards Gary Neale said; "it was a dry start and while overall rain levels have been lower than normal, it has been a great growing season.

"Canopy management has been pretty important as has been staying on top of our spray regimes."

The unusual heat has meant fruit has been developing quickly encouraging flavour development and ripeness at slightly lower than average brix levels.

In the Moutere Hills Tim Finn from Neudorf Vineyards says the vineyard is "looking very green, but it has been a funny old season. It began with what appeared to be not a great start, cold and dry in September. October was warmer but still very dry and then post flowering we got the first hit of rain that we needed, it was a drought breaker and helped berries fill out.

"We have ended up with a reasonable crop with little crop reduction required."

Grape Vision viticulturist and COWA President James Dicey describes Vintage 16 as being extremely challenging. "There is a farmer here named Jack Davis who is just retiring from his farm after 39 years and he can't remember a drier year. We hadn't had any significant rain since May (2015) so this meant that we were behind the 8-ball going into the season.

With the exception of one big dump that drowned the region a few weeks ago, Dicey reckons that the region has had just 50% of its annual average moisture, the whole way through the season.

"The negative with that deluge is we are just at the start off the cycle where botrytis can become an issue.

Usually 100 berries on a bunch equals 100 gram bunches for our Pinot, well we've probably got between 150 and 190 berries this year, so that means very small berries packed into tight bunches.

"As a result of that sudden downpour, there has been some swelling which has pushed some of the berries off the peduncle and that has created a lesion where botrytis has started. Given how dry it has been, it's not what we were expecting."

"This year the yields are, with some minor exceptions, sitting in a really good space. I'm probably more excited about the potential than I have been for a very long time." ν

A stem-to-cloud tool that transmits plant water health to a grower's phone is "the way of the future", says a viticulturist trialling the water-saving technology.

Jake Tipler's wine tourism business took him to every corner of Central Otago's wine industry, celebrating people and place, until Covid-19 desimated his client base.

At the top of their field

In the lead up to the Corteva Young Viticulturist of the Year National Final 2021, we get to know a bit about the regional finalists from around the country.