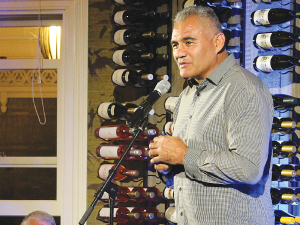 He was the keynote speaker at two events aimed at recognising the hard work of the target farmers, mentor farmers, consultants and partners in the Extension 350 farmer-to-farmer learning project.

Set up in 2016, it is aimed at getting 350 farmers involved across Northland -- ideally 50 target farmers working with 50 mentors, and 250 associate farmers learning from the target farmers’ experiences.

Rush spoke to both groups about his life, including an All Black tour when he met Mandela. The politician told him he had been inspired, while in prison decades before Rush’s All Black tour, when he watched the NZers play the Springboks.

“Mandela told us that the Springboks were a symbol of apartheid so when the All Blacks scored, all the Robben Island prisoners rose to their feet.”

Rush and the All Blacks had tea with Queen Elizabeth at Buckingham Palace and met Princess Diana.

“The trumpets of the palace… the fanfare… I’ll tell ya, it was a million miles from where I was brought up.”

He said Kaeo was typical small-town NZ with little money and few jobs. “We didn’t have material stuff.”

The playfully-spoken sportsman said he and his four brothers, as young Kaeo lads, hand-milked their eight cows.

“We didn’t have iPhones but we learned heaps about life. If I had my time as a kid again, I wouldn’t change anything.

“We had no running water and just one bath a week. We got electricity when I was 11 or 12. There are a lot of things I take for granted now – opening the fridge, turning on the TV or  flushing the toilet.”
Rush played rugby as a kid but didn’t know of the All Blacks.

“We played rugby so we could go to the shops at the weekend. We lived 20km out of town and if you didn’t play rugby you stayed home and did jobs with your father.

“I had a tough dad. He pushed us hard but only wanted us to do our best,” he said of his Irish father.

“I once told him about my scoring four tries against Hawkes Bay. Dad told me off for being greedy,” he laughed.

“We would fundraise in Kaeo for the five-hour bus trip to Whangarei to watch the games and eat KFC. Fast food in Kaeo was hitting a sheep at 100km/h.

“Those trips were where my dreams started.”

He soon discovered that the amount of practice set apart the winners.

“And sometimes you learn more when you’re going through the tough stuff,” he advised the audience.

“Talent only gets you so far. To get the rest of the way you need hard work.

“Success breeds success. If you want to be a successful person, hang around with successful people. That’s what E350 is all about.”

He was an imposing force on the rugby field and now ex-All Black great and rugby icon Richard Loe wants farmers to stand up and take notice about safety.

As All Blacks coach Steve Hansen would say, a win is a win, albeit an unconvincing one with plenty of room for improvement.