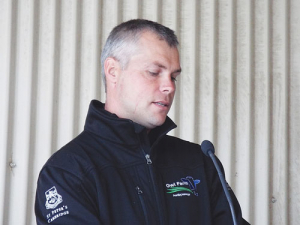 The joint venture demonstration dairy farm run by St Peters School Cambridge and Lincoln University had its Farm Focus Day in mid-November and gave visitors an overview of how the 2018-19 season was shaping up compared to the previous year.

With 406 cows onfarm, numbers were down on 2017-18 when numbers hit 422, brought about by a higher empty rate, insufficient replacements and a closed-herd policy.

The good news is that total production is up about 2% or 1700kg year-to-date, somewhat behind the national season-to-date production — up about 6% on 2017.

Having fewer stock on the paddocks has been a challenge to pasture quality, but the production numbers — whether on a total or per cow basis — have risen since early September: early November figures are 1.83kgMS/cow/day.

The June - August period showed reduced growth rates: 0.8tonnes/ha or about 10% less feed grown than in 2017.

Similarly, homegrown grass eaten is about 1.2t/ha or 20% lower than last year, with more milk produced to date; aggressive management has seen about 0.6t/ha more silage being harvested to date.

Buckley also said the cows were generally in better condition, putting fat from their backs into the vat and, having eaten less, showing better feed conversion efficiency. This is why the farm has used 9.4% less feed for every litre of milk going out the gate.

A key change in the Owl Farm system has occurred in the last two years, with widescale pasture replacement and renovation, the introduction of spring-sown/summer grazed turnips and the removal of maize from the rotation.

The only supplements used are PKE and a small amount of imported forage from a run-off block, meaning the operation is “comfortably better placed” than at the same time last year, with feed reserves available, particularly high-quality silage for summer milk production.