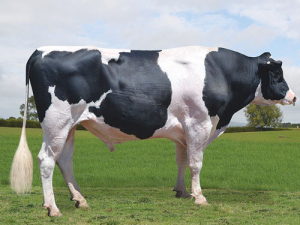 The Holstein Friesian Genetic Leaders has reached an unprecedented strike rate of bulls graduating to market with the latest addition to the CRV catalogue, Rivendell GForce Axel.

With six bulls in the team annually, and at least one bull on average per team graduating to be marketed by CRV, Holstein Friesian Genetic Leaders is the most successful sire proving programme in the bull industry to date, HFNZ says.

The Holstein F programme has been running for 22 years, with the aim of ensuring the best genetics within NZ’s own pedigree Holstein Friesian population are sourced and made available to the dairy industry.

Over 18 HFNZ-member-owned pedigree bulls have reached market via CRV since 1995 (at least one per year for the last 11 years), realising many and varying benefits to HFNZ, its members and the wider dairy industry.

Another benefit of the Holstein Friesian Genetic Leaders programme is breeder members’ pedigrees holding pedigree status in the commercial world, increasing their relevance.

“Whereas commercial bulls that have been supplementary registered have heavily dominated the market, pedigree bulls are becoming more common, which is great for a pedigree association and its members,” says Courtman.

Swart says full pedigree status is important in the marketplace.

“Full pedigree cows are becoming harder to find and the Holstein Friesian Genetic Leaders programme can be valuable to breed top sires out of full pedigree cows,” says Swart.

“Internationally, the opportunities are growing as the benefits of using Holstein Friesians in developing pastoral dairy markets are becoming more widely recognised.

“The partnership with HFNZ has proved valuable in helping to open markets such as Ireland and South Africa to the NZ Holstein Friesian product, and continuing the expansion of our international markets is a key priority for CRV.”